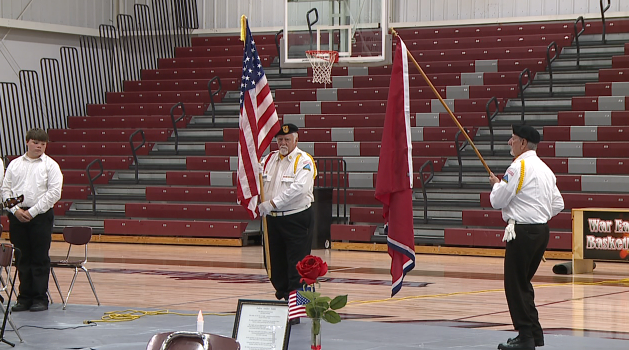 Students filed into West Carroll Junior/Senior High School Thursday morning to learn what it means to be a veteran and some of the traditions they hold dear.

“We want them to understand it, and we try to do it respectfully, so that they can get that. We try to pass that on to them,” Vietnam Veterans of America 995 Color Guard Member Carl Johnston said.

The color guard with the VVA and a group of other veterans held the ceremony with the West Carroll band.

They included a flag folding ceremony, the soldiers cross, recognition of veterans in attendance, and military songs from the West Carroll band.

The veterans say ceremonies like this are essential to teaching kids respect and discipline.

“That’s a big thing for us because we fought for the flag,” Johnston said.

For these veterans, it reminds them of sacrifice.

“Their fathers, grandfathers, uncles, so on forth will someday have a military funeral, and they’ll understand the meaning of the flag being folded,” Johnston said.

“You reflect back to how you live, and this is still the greatest country in the world,” Steward said.

The veterans were then treated to a special brunch in the school library, made by the culinary students.