Friends step in to help 99-year-old woman with delivery 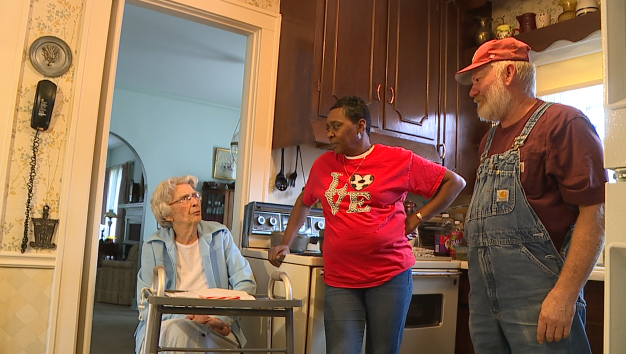 But she realized that her house was so old, that most refrigerator units wouldn’t fit in her home.

“We found out that they’re making appliances, and especially refrigerators, taller and a lot of time people have to have the cabinets cut down,” King said.

She eventually found a unit; however, no one was able to deliver it for her. That’s when an old family friend, Tommy Jordan, stepped in.

“He was very kind to me. He always comes when he said he was going to come, and he always worked diligently,” King said.

Jordan has done plumbing work for King for years, and they built up a friendship. Not only did he step in and install her new refrigerator, but he helped her get rid of the old one.

“I was very touched by his generosity, and getting his crew to come. They were so interested in the fact that the refrigerator was old, and that they were carting away a very old refrigerator and bringing in a brand new one,” King said.

Jordan didn’t want to speak on camera, but says he did it because he knew she needed help and he was happy to do so.

“Beside being a plumber, he’s been a friend to my family,” King said.

Jordan says they also plan to bring her an ice box soon as well.