JACKSON, Tenn. — A local organization got a helping hand just ahead of the holiday season. 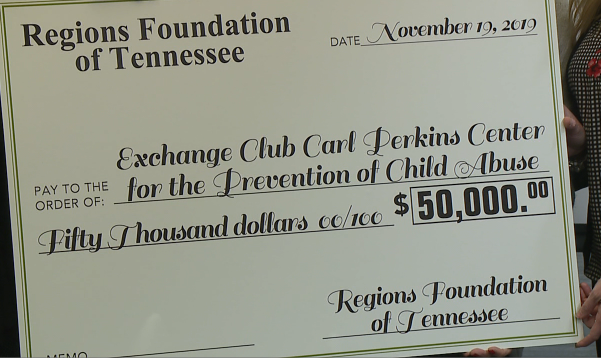 “For our bank to be healthy, we have to invest in the communities in West Tennessee,” said Regions Bank Jackson Market Executive Scott Beard.

And Tuesday, the Regions Foundation of Tennessee invested in the Carl Perkins Center for the Prevention of Child Abuse by donating $50,000.

“We’re proud to present this check on behalf of The Regions Foundation to the Carl Perkins Center for the Prevention of Child Abuse and support their services across West Tennessee,” Beard said.

That amount will be distributed across West Tennessee and reach dozens of children. There will be about $600 for each.

Many of the children helped through the organization are ones who have dealt with abuse, and it will help them receive services, like therapy, from the center.

“Because of those dollars, we will be able to serve 83 children, and the money will be distributed among the counties where there are actually Regions banks, and so they’ll be able to receive money to be able to help their children in their counties also,” said Pam Nash, President and CEO of The Exchange Club-Carl Perkins Center for the Prevention of Child Abuse.

The money is in addition to the more than $1 million the organization raised with the Circles of Hope Telethon in August.

“We just really appreciate the support of West Tennessee,” Nash said. “We could not do it without the love and support of everyone.”

The Carl Perkins Center for the Prevention of Child Abuse is also holding their annual Rusty Mac Adopt-A-Teen program this holiday season.

If you would like to participate in that program, or learn more about the Carl Perkins Center, head to the “Seen on 7” section of our website here.