TROY, Tenn.– “I didn’t think it would be completely gone, but it is,” said farmer Seth Taylor. 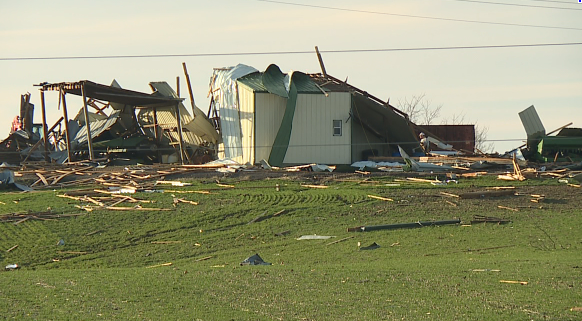 Taylor said it had everything he needed to prepare for the farming season.

“Shop tools and equipment was in one, and we had service trucks, pretty much our whole operation,” Taylor said.

“Obviously we’ve got a kink in things now,” Taylor said.

Taylor expected to see damage, but was quickly overwhelmed after a call from his neighbor.

“He said there’s no power and no lights up there. He said, ‘In the lightning, we don’t see anything up there so you may want to come up here,'” Taylor said. “Probably three-quarters of a mile down the road, when we started seeing green tin, which was what the roof was, that’s whenever I realized it might be worse than I thought.”

Pieces of his shop were everywhere, even on his neighbor’s property.

“We have two grain bins behind us here. They’re both in his pond,” Taylor said.

Less than a mile from Taylor, there is more damage at a home, with two vehicles wrecked.

Taylor said with what’s left of the shop, it will probably take half a million dollars to get everything back, plus a lot hard work to clean up the mess.

“That’s going to be the worst part, cleaning up this field,” Taylor said.

According to the National Weather Service, a severe thunderstorm warning was sent out in Obion County when the tornado happened.

A second tornado was confirmed to have touched down in Sharon, in Weakley County, at 5:58 a.m. Saturday. The National Weather Service says that tornado had a mile-long path, with 85 mph winds, that destroyed outbuildings and sheds and ripped trees from the ground.