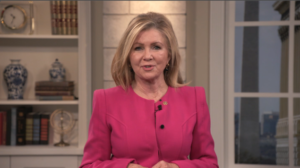 “We are hopeful that they are going to decide to act like a normal nation and set aside being the world’s largest state sponsor to terrorism,” Blackburn said.

When asked if former National Security Adviser John Bolton should be called as a witness as part of the impeachment process in the Senate and whether or not she would vote to dismiss it, Blackburn said she would look into the due process of law.

“After we have heard the arguments, then that will be the point at which there will be a vote on whether to proceed or if we wanted to call witnesses,” Blackburn said.

WBBJ 7 Eyewitness News reporter Corallys Ortiz asked Blackburn whether or not she felt the impeachment process had impacted any progress at the nations capital.

“I have to tell you, this is one of the things that we have heard the most about from Tennesseans,” Blackburn said. “Tennesseans want this impeachment process over with because they talk about the opportunity cost and the fact that in a year the U.S. House of Representatives has not moved forward on items of importance to the Tennessee people.”

Blackburn brought up the lack of progress with the United States–Mexico–Canada Agreement and the impacts she thinks it had on West Tennessee.

In regards to Tennessee, she feels the state has been a leader in job and wage growth, and thinks it’s essential to continue educating the workforce and prepare for the next 10 years.

An issue Blackburn said she’ll focus on this year will be facilitating more education and training programs in the field of advanced manufacturing.