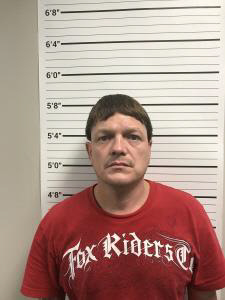 Cruse is wanted in connection to a pursuit with the Tennessee Highway Patrol and crash on Conrad Ridge Road.

“I took a ride and saw all the police up there, and they were down in the woods,” resident Johnny McAdoo said.

The sheriff’s office says the crash happened around 9 p.m. Sunday. Investigators say drugs and drug paraphernalia were found in the reportedly stolen vehicle.

Cruse ran from the scene, according to the sheriff’s office.

“An hour later, they were down here in front of our house with spotlights, officers walking and dogs,” McAdoo said.

Sheriff Keith Byrd said they requested the Henry County K-9 officers. They were out until the early morning hours, but had no luck finding him.

“It’s nice that they stopped and let us know what was happening. We have a lot of older people on this road,” McAdoo said.

Cruse has previous charges of theft, burglary and second-degree murder.

“You don’t want him running loose around here,” McAdoo said.

While this is a secluded area, residents told WBBJ 7 Eyewitness News reporter Julia Ewoldt it wouldn’t be easy to escape due to thick underbrush, lots of trees and barbed wire fences.

“It’s thick in there, but this time of year, all the leaves are off. But I mean, it’s pretty thick in these woods. It’s not easy to get around,” McAdoo said.

The Decatur County Sheriff’s Office says the only warrants for Cruse stem from this crash.