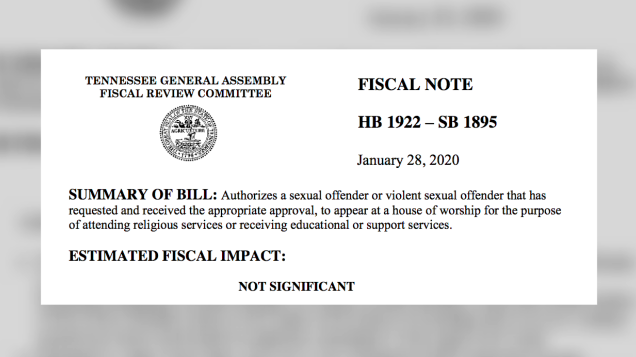 The bill would allow sexual or violent sex offenders to attend a house of worship,but only under certain circumstances.

“My bill simply makes it clear that this person, who is a sexual offender, can attend those kind of classes as long as they have written notice of the offenders status,” said Hazlewood. “Folks that I’m working with they require that he have someone with him at all times, either from the staff or church leadership, but that’s up to the individual church.”

WBBJ 7 Eyewitness News reached out to several churches in the area, but many were either not available for comment or chose not to speak on the matter. Residents voiced their opinions about the bill.

“As a father, you know, it’s concerning, but as a Christian as well, you know’ I’m all for second chances and all for people turning their lives around,” said Jackson resident William Rainer. “What other better place to do it than at church.”

Although the bill has its cons, some say it can be used in positive ways.

“I understand that there would maybe be some fears of those people being among the congregation,” Jackson resident Lynn Havner said. “But, in a controlled circumstance I think that’s where they need to be is in a church.”

“You can’t shun people who are going through things at church,” Rainer said. “The church is a hospital, and that’s what people who have issues and people who are sick come to be healed so you know, why not?”