JACKSON, Tenn. — February 1 marked 60 years since the sit-ins at a whites’-only counter in Greensboro, North Carolina.

These sit-ins sparked a movement across the nation, even in downtown Jackson. 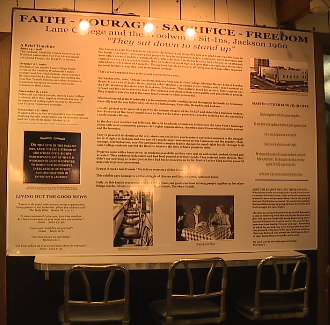 “I think I was probably 17 years old at that time,” said Jacksonian and Lane College alumna Shirlene Mercer.

Mercer was one of four students from Lane to participate in a sit-in at the Woolworth lunch counter in downtown Jackson.

Mercer said she was just a kid fighting for her rights.

“Sure I did, I went to jail and everything,” Mercer said. “They felt like I was a criminal of some sort. They thought they had done well by arresting us. We were kids.”

What Mercer remembers the most is the way some people treated her.

“I remember when white people would spit on us because we were on the picket line, trying to protest segregation. These same folks would kick us and do things to us. We were kids,” Mercer said.

Now all grown up, Mercer is one of the last Lane students still living who participated in the sit-ins.

“We’re here today to pay homage and heritage to so many of our guests and others who paved the way for all of us to be here today,” Old Country Store owner Clark Shaw said.

Tuesday at the Old Country Store, Shaw unveiled three stools: the same stools the Lane College Students sat in during their non-violent protest.

“That meant so much to us because we didn’t have a right to sit there, but I think it’s great that the family decided to keep them. A lot of people probably would have thrown them away,” Mercer said.

Shaw also bought more stools. He said he plans donate the others to Lane College, the Jackson-Madison County branch of the NAACP, the James Wolfe Music Academy and place others in more areas of the Old Country Store.