HENDERSON, Tenn.–“I still have a bullet in my chest. I lost a finger,” said Minister Joey Spann. 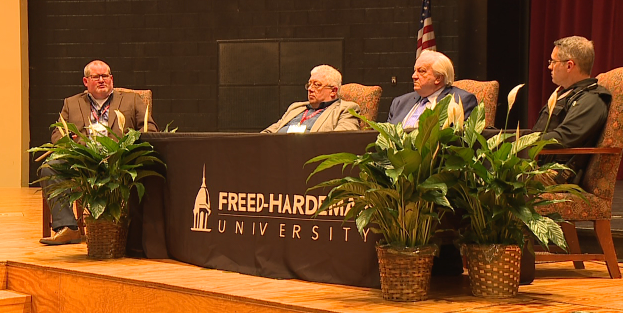 Spann is a survivor of gun violence, of violence brought into a place that has, in some cases, become a target across the nation: the church.

“We weren’t ready for it to happen. It caught us completely unaware,” Spann said.

Spann, of the Burnette Chapel Church of Christ in Antioch, said he along with others of his church are lucky to be alive after the 2017 shooting that killed one person and injured seven others, including Spann.

“We never considered anything bad happening like that at a congregation our size, in a remote area of Nashville,” Spann said.

Which is one reason Minister Spann said his congregation was not prepared for a situation like this.

“If it happened, it would happen in somewhere like New York or Los Angeles, something, but not in our church, you know,” Spann said.

Wednesday night, in a panel discussion, Minister Britt Farmer of West Freeway Church of Christ in White Settlement, Texas joined Spann to talk to people about his experience with a fatal shooting in his church.

Stewart Brackin, Director of Safety and Security at Freed-Hardeman University, joined in on the conversation as well.

“I want to stress the forgiveness. I think people need to know that. I did want them to get the idea that we weren’t ready,” Spann said.

Spann said he is hopeful that people listening will consider preparing for situations like this, so lives can be saved.

The shooter in the 2017 Burnette Chapel Church of Christ shooting, faced 43 charges. He was found guilty on every charge.