SB 2696 and HB 2778 were bills introduced by Senator Mark Pody and Representative Jerry Sexton in hopes to make the Bible the official state book. It’s not the first time this bill was introduced. 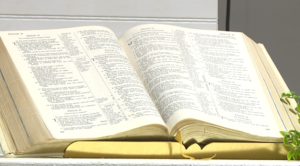 In 2016, a similar bill was proposed, but vetoed by Gov. Bill Haslam on the grounds it violates the First Amendment.

Some people did say off camera that they don’t agree with the proposal because it could infringe on the religious beliefs of others.

Others felt that the Bible represents the state.

Some religious leaders also agreed it represents the state.

Both pastors feel that the Bible holds a historic and legislative place in the government. They used scriptures from the Bible to defend their reason.

“The Bible says, in the beginning, was the word of God in John chapter one, and it’s been there since the beginning and it will be there until the end,” Newell said.

“Therefore, we can’t help but have as the official book of Tennessee,” Dodrill said.

Efforts to push the bill through the state legislature are gaining momentum.

As of Monday, the bill has passed on second consideration and has been referred to the state Senate and local government committee for the next steps.

WBBJ 7 Eyewitness news attempted to reach Sen. Pody and Rep. Sexton. However, they have yet to respond.