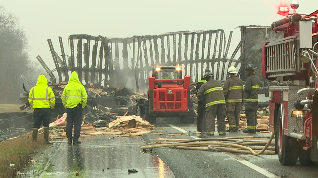 Turner said the crash caused a wall of fire and billowing smoke that could be seen for miles.

Westbound traffic along the interstate was then stopped for an extended amount of time as firefighters battled the blaze and crews worked to clear the scene.

“We were sitting in traffic for 45 minutes,” said driver Bill Gray.

“I think I was in traffic probably about an hour and 40 minutes, because my time I was supposed to make it home was about 3:35, so now I won’t be home until about 5:30,” Savage said.

“I felt like I was finally glad to get somewhere. We was sitting still, like, just creeping along for 45 minutes plus,” Gray said.

“My co-worker was ahead of me, so she told me an 18-wheeler carrying some fruit, I guess it had an accident,” Savage said.

One person was taken to a local hospital.

Investigators said they are in the process of notifying the victims’ families.
The interstate had one lane open around 5 p.m. Wednesday. The interstate completely reopened around 7 p.m., according to the Tennessee Highway Patrol.

THP says the cause of the crash is still under investigation.