“I’ve always had a passion for food,” said Peter Thomas, chef and owner of the new Hub City Deli in North Jackson.

At age 16, Thomas began his 30 year journey in the food service industry.

“I was in the restaurant business a 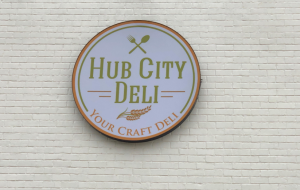 long time and was planning to do something for myself,” said Thomas.

Growing up, he worked after school and on weekends. He spent many years as a General Manger at Olive Garden. Now, he and his wife, Shelley, are following a dream by opening this farm to table restaurant.

“Peter  is an awesome cook and good chef and I think this is a good thing for the community. I mean, homemade pickles? Who does that! Right?” said customer, Charlene Doyle.

They serve homemade pickles, fresh craft sandwiches, salads, soups and wraps; not to mention fresh bread made in house everyday.

“There’s not really any delis that smoke their own meats, make their own bread in house and pasta salads,” said Shelley.

“We sold out of food by 2 o’clock today,” said Thomas.

“We had a couple rushes today. It was wild, but a good wild,” said Hub City Deli cashier, Antonio Black.

The Hub City Deli sold out of food so quickly during their grand opening, they had to temporarily shut their doors. But, don’t worry, the deli is back open and ready to serve the Hub City.

“Be adventurous and try something new!” said Thomas.