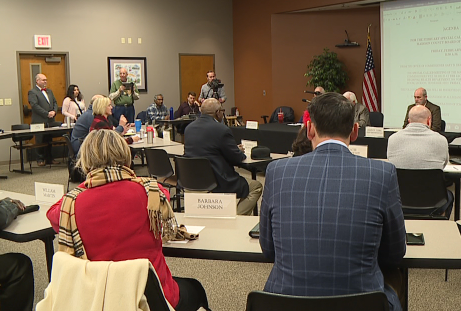 “When it comes down to it, we want three schools built. We want to do that in the least painful way possible,” county commissioner Adrian Montague said.

“I have not talked to anybody in our community, and I’ve talked to people all over town, who don’t want the wheel tax,” county commissioner Claudell Brown said.

“Without the wheel tax, we are not going to be able to do that. Period,” county commissioner Jason Compton said.

“I don’t think anybody wants a tax or anything like that, but the thing is, is the need there? I would probably say, ‘Yes,'” county commissioner Doug Stephenson said.

But the City of Jackson still has to vote on the public-private partnership, and that decision could have an impact on the county’s decision.

“This is a very tough situation,” Stephenson said.

And as far as the decision on the partnership and tax? That’s still up in the air as well.

“I think we need to explore all of our options. The wheel tax on the surface makes sense. If there’s another way, I’m all ears,” Montague said.

‘That’s a really good question, and I don’t know the answer to that, and I’ll be honest with you: I’ve been struggling with it,” Stephenson said.

That decision will be made on Tuesday.

The county has to make a decision quickly on the public-private partnership. All the paperwork has to be signed by the end of March.

The wheel tax would need a two-thirds vote on two separate readings to pass.

Part of the dilemma is due to the school partnership and the wheel tax being dependent on each other, but no one knowing where the vote will end up on either.