JACKSON, Tenn.– A celebration of 112 years of service to all mankind. 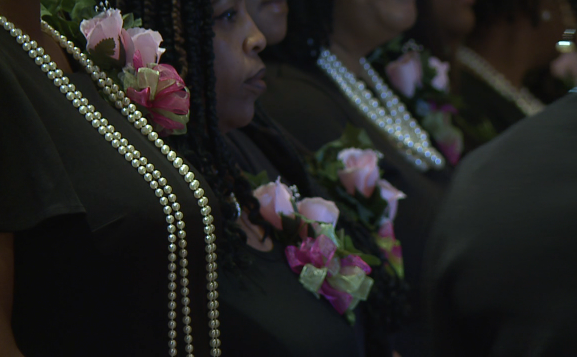 “I’ve been an AKA for 35 years,” said sorority member Patricia Beasley.

Members of Alpha Kappa Alpha Sorority, Incorporated showed up in their perpetual pearls, to honor their beloved organization.

The sorority was founded on January 15th, 1908 on the campus of Howard University in Washington D.C.

That evening pink and green lights were shined on members of the sorority but also to local nonprofits and students of Jackson-Madison County Schools.

The sorority donated $1,000 to Habitat for Humanity and the Boys and Girls Club, plus a student of North Side High School was awarded a full scholarship to Tennessee State University.

“The accomplishments, the challenges, how the grace of god has sustained us,” said Dr. Glenda Baskin Glover, International President of Alpha Kappa Alpha Sorority, Incorporated.

“For the first time in the existence of Gamma Alpha Omega, we had an international president to come to Jackson, Tennessee,” Banks said.

“It’s not every chapter that gets to have the international president come to their founders day,” Beasley said.

Sorority member Patricia Beasley said she is honored to be in the presence of the international president as well as being awarded this year’s Most Precious Pearl.

“This is the most respected, the most highest, reward you can get in our sorority. I don’t take it for granted. I really appreciate my sisters for voting me in for this award,” Beasley said.

The Gamma Alpha Omega Chapter also donated $1,000 to HBCU for life, which is a program target of the sorority.