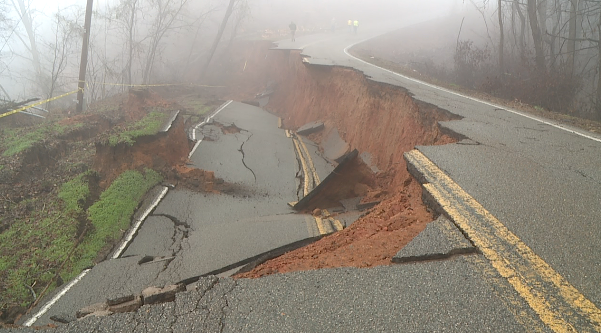 “The road is continuing to sink, and we don’t know where the stopping point is going to be right now. The road is destroyed in that area,” Steve Cromwell, Hardin County Highway Superintendent, said.

The road collapsed sometime late Monday night, the result of a landslide that destroyed two homes over the weekend.

With this portion of road collapsed, county officials aren’t taking any chances.

“It’s continuing to move as we talk, and we don’t know where the stopping point is going to be. It’s so large,” Cromwell said.

“We’re going to look at moving the road over in another location, further away from the slide so it won’t happen again,” Cromwell said. “We don’t know how much further the slide is going to go.”

In the meantime, officials say that while you may be tempted to check it out, don’t.

“We want everybody to stay safe out here, because unfortunately, it’s not passable, and you don’t want to get too close walking even,” Martin said.

Authorities confirmed that most other households in the area still have water and electricity, thanks to rerouting efforts by local electric companies.