JACKSON, Tenn. — Three times a year, the Jackson-Madison County Chamber of Commerce gives people an open invitation to speak with their legislators. 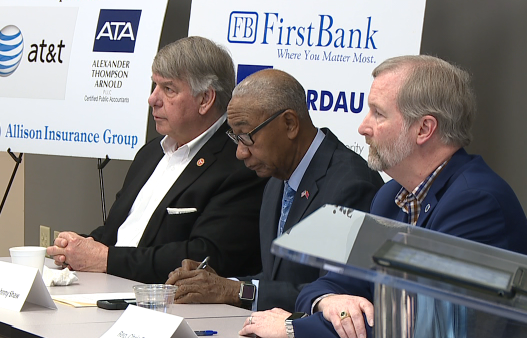 “We get a lot of ideas from folks, ideas from people back home that we might not know about. So we really try to take those seriously,” Rep. Chris Todd said.

People were concerned about a myriad of topics, including more access to healthcare and criminal justice reform.

“Some of those opportunities have already been there. Folks just don’t know about them because no one took the time to tell them about it,” Rep. Johnny Shaw said.

After the meeting, WBBJ 7 Eyewitness News asked lawmakers where they stand on the hot-button issues, such as the governor’s refugee resettlement program.

“They’re not vetted enough, in my opinion. I think we need to do a better job of making sure people want to come to work, they have skills and they don’t go on assistance,” Sen. Ed Jackson said.

“I stand firm with the governor on that. These are refugees. These are productive people,” Rep. Shaw said.

“What I asked the governor to do is rescind his letter to the president where he is authorizing resettlement in Tennessee under this particular executive order, only from the standpoint that, and he agreed with me that it expends state funds,” Rep. Todd said.

And we asked if they have plans to rework a bill meant to allow voters to recall school board members.

“There are some counties across the state that would like the ability to recall a school board member,” Sen. Jackson said.

This legislative session is expected to end mid-April

In the meeting, all three lawmakers said they plan on running for reelection. Rep. Todd and Rep. Shaw’s seats are both up for reelection in November.