JACKSON, Tenn. — It was on a rainy day at the start of the year when a sinkhole opened up on Casey Jones Lane. 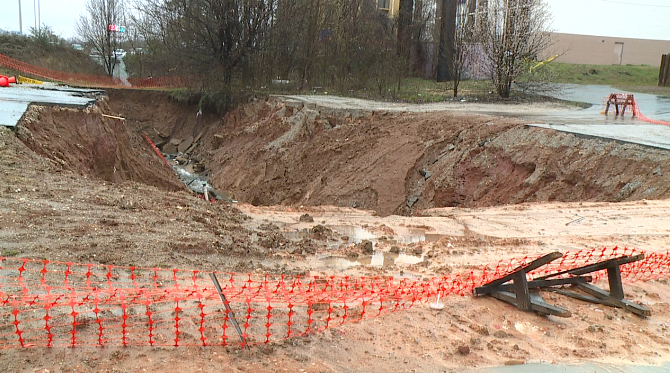 Sometimes when there’s excessive amounts of rain in a short period of time, sinkholes can pop up.

Old Country Store manager Brooks Shaw spoke about the sinkhole near the property.

Only the part of the sinkhole that was on the city property has been patched, but Shaw says the Old Country Store has to fix the rest.

“Our plan is to put up a wooden privacy fence around the sinkhole for safety for the public until a time we can collect bids and see what we’re going to do to fix it,” Shaw said.

City engineer Scott Chandler says some of these sinkholes happen due to old pipes. They normally have an average lifespan of about 30 years before they start to deteriorate.

“The pipe that you see still in there is part of the old pipe that’s still to form,” Chandler said. “The part that completely failed collapsed on itself had to be dug out.”

The same thing happened to an even larger sinkhole by the Denny’s parking lot on Christmasville Road, which appeared last summer. Chandler says there’s still a decision between the developer and the businesses of that plaza on what to do.

“I think attorneys and the corporations are all meeting still to try and determine who should be making the repairs on each component,” Chandler said.

Casey Jones Village is a known tourist spot in Jackson, and fortunately, Shaw says his business was not impacted too much.

“The biggest part is that the roads open and you know you can access everything here,” Shaw said.

Shaw says that they are planning to move forward in fixing the sinkhole near Casey Jones Village by this spring.