HARDIN COUNTY, Tenn. — A local landslide sends what’s left of one road into the Tennessee River. 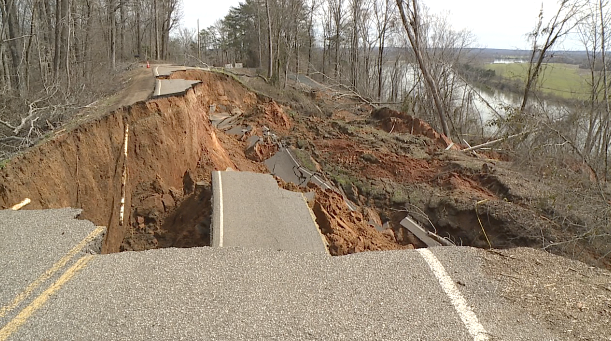 “We just came around the barricades. It’s too dangerous to get down here to it because we don’t know how much larger the slide is going to get,” Hardin County Highway superintendent Steve Cromwell said.

Cromwell says this landslide in the Chalk Bluff area is causing problems for residents.

Officials say Glendale Road is the main road to Saltillo and Hooker’s Bend, and because it sees a lot of traffic, they set up a detour.

“It’s a pretty good burden for the residents having to use that right now because it’s not a very good road for a lot of traffic,” Cromwell said.

Residents who live along the detour didn’t want to speak on camera. Many say they’re not happy about the increased traffic, but understand drivers need to get around the slide.

The cave-in that started about three weeks ago has taken out Glendale Road completely, and Cromwell says the highway department has a lot of work to do to build a new road in its place.

“Depending on the weather, I’d say within two or three months we should have something usable through here. That’s our goal,” Cromwell said.

He says the landslide, which also took out two homes, started roughly ten years ago.

Erosion also contributed to the problem in addition to heavy rain and flooding.

“It’s just a pitiful situation for the landowners who lost not only their houses but use of their property,” Cromwell said.

So far, there isn’t a timeline on when Glendale Road will reopen.