BOLIVAR, Tenn. — Bolivar Mayor Julian McTizic and his wife, Demetria, have created an online, virtual game on Facebook as a way to have some fun while in quarantine. 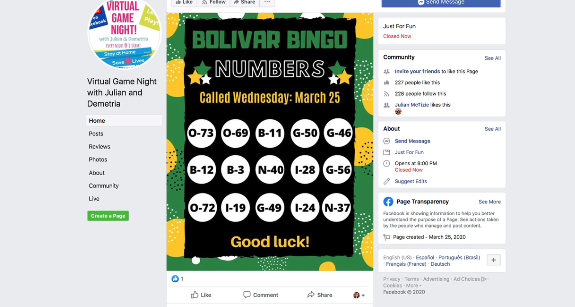 “With the spread of the coronavirus, we are all kind of locked up in the house, missing interactions with other people, so one night we were in bed, I was like, ‘Babe, we should play virtual games with our friends on Facebook,'” Demetria said.

Players can join in on a variety of games. Julian and Demetria communicate with players via Facebook Live.

On Thursday night, gamers can join in on Bolivar Bingo. The games will be played every night at 8 p.m., and goes to support local small businesses affected by the coronavirus.

“The Bolivar Bingo is an ongoing game. You can inbox us, message us on Facebook for cards, and we send cards out and we pull numbers during virtual game night, and we just do that at the beginning and our actual game that we play lasts for about 45 minutes,” Demetria said.

“[It] shows them [small businesses and players] our support. That is ongoing as long as we are locked up together, I guess,” Mayor McTizic said.

“We call our viewers our ‘quarantine cousins’ because we have all kind of become a little family,” Demetria said.

The gift certificates from those donations are up for grabs as prizes for the game night winners.

Department of Health partners with PBS for video lessons