MORRIS CHAPEL, Tenn. — After the storms over the weekend, a landslide in Hardin County grew much larger.

Large parts of Glendale Road in Morris Chapel have been blocked since the initial slide in February. 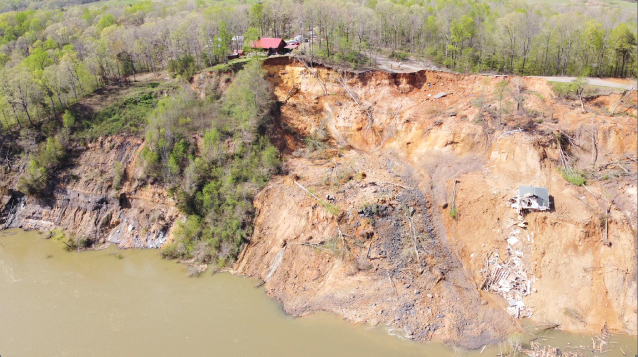 Martin says the landslide has grown to at least three to four times its size since mid-February. Right now the roads are closed off and the only way to access and get visuals of the landslides is with the use of drones.

Drone footage shows the extent of the landslide, an area of about an acre. You can see what’s left of the homes that dropped off the edge last month. The owners of the red-roofed house at the edge of the drop have evacuated, making it the third home in danger.

“For this home here, they’re just going to evaluate it,” Martin said. “I don’t think it’s safe to go in the house anymore, so they will have to see what happens with the landslide and go from there.”

The fire department is continuing to monitor the slide. They are asking people to avoid the area and to not cross any of the barricades for your own safety.

Martin says the highway department still has future plans to extend parts of Glendale Road further back away from the landslide area to make it accessible again.