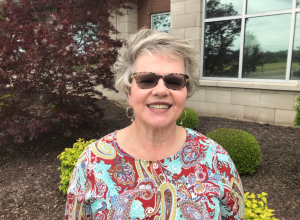 arted when she just wanted to earn some extra credit.

Sharon Clayton was a college student when she found her calling.

“I’ve been donating blood ever since college. I started with a professor giving extra points,” said Clayton.

Now, she has accomplished more than good grades.

“This is my 44th year of donating,” said Clayton.

Clayton started out as a whole blood donor. When she learned about the great need of platelets, she stepped up and starting donating platelets. Platelets are critical to the health and well being of patients suffering from cancer, bleeding disorders and other diseases.

“When I started donating palettes, I got an overwhelming feeling when they say ‘thank you.’ Saving lives is what it’s all about and we may be in the position one day as well,” said Clayton.

Platelet donations require a more committed donor since it takes up to two hours, whereas a blood donation can be completed within 45 minutes.

To date, Clayton has saved thousands of lives; giving 72 gallons of blood which is 590 donations.

“It’s a very worthwhile cause. As long as I can, I want to donate, “said Clayton.

Clayton has earned a place of honor on Lifeline’s Wall of Fame that displays names of blood donors who have given more than 10 gallons of blood. Lifeline Blood is in a greater need than ever before during this global pandemic. If you would like to donate, they have the same hours of operation and are following CDC guidelines.