JACKSON, Tenn — Several industries have been impacted by the Coronavirus over the last two months. Now, the meat industry is on the chopping block. The decrease in the supply for them to be store-ready might cause a potential shortage, which could mean increasing prices for consumers.

“This week is the first week we’ve really felt the pinch on it,” said Tim Throne, General Manager at Paul Latham’s Meat Company. 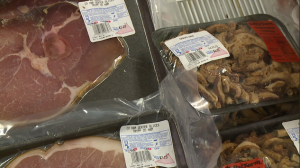 Throne says they have about eight different buyers supply their meat. He’s been told by his suppliers the demand for meat products the next two to three weeks could be tight.

In recent weeks, over 4,900 workers at more than six dozen meat packing facilities have fallen ill with the virus, which in turn has paused some operations.

“Prices are changing daily,” said Throne. “Instead of where I’ve been quoted on prices weekly, what I bring in tomorrow, the next day, if I order it, the prices could go up.”

It makes it harder to find popular meat options.

“Chucks, they were at $4.99 a pound, now they’re gone up to $7.99 a pound,” said Throne. “Everything is increasing right now. Pork, beef and chicken. It’s all taken increases everyday or every week.” 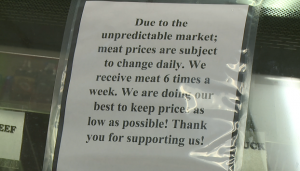 The Centers for Disease Control and Prevention also put out a Critical Infrastructure Guidance that advises implementing precautions for those continuing to work to protect them and the community. Most of these shortages though are expected to be localized.

“We’re local, we’re taking care of the local people the best we can,” said Throne.

Throne advises consumers not to hoard or stock up on meat, and stick to buying them weekly. He’s hopeful the shortages won’t last long as more guidelines are being put in place for workers.