JACKSON, Tenn.– “Our goal and our objective with these protests is to simply bring awareness to the injustice that’s going on with our black indigenous people of color,” said activist Tracy Boyd. 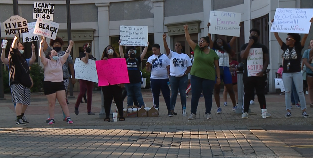 Boyd, a Jackson native, and hundreds of other Tennesseans, utilized their First Amendment right to the fullest Sunday evening, speaking out against police brutality.

This outcry is in response to the recent death of George Floyd, an unarmed black man who died at the hands of a Minneapolis police officer.

“So we know that we had an arrest with the police officer who kneeled down on George Floyd. However, he was not the only one. We have several other police officers who also need to be held accountable for their actions,” Boyd said.

Boyd organized protests in Jackson over the weekend. On Sunday, he wore a vest bearing a message.

Other leaders of Jackson stepped up to join protesters during their cry out for justice.

Jackson attorney Marcus Lipham and his wife Shayla set up food outside their law office for protesters.

“He woke me up and said, ‘Hey, do you want to change the world today?’ and I was like, ‘What do you mean?’ ‘Let’s go downtown and feed everybody,’ and I was like okay,” Shayla Lipham said.

“We’re doing it right. Nobody fights at a barbecue, nobody burns things down,” Marcus Lipham said.

Protester Cody Doss said, as a white man, it’s vital that he speaks up during times like this.

“Mostly just to be vocal because at the end of the day, minorities are minority and you need votes, you need majority, to make change you know,” Doss said.

The officer who had his knee on Floyd’s neck has been arrested and charged with third-degree murder and second-degree manslaughter.
The other three officers have been fired and are under investigation.