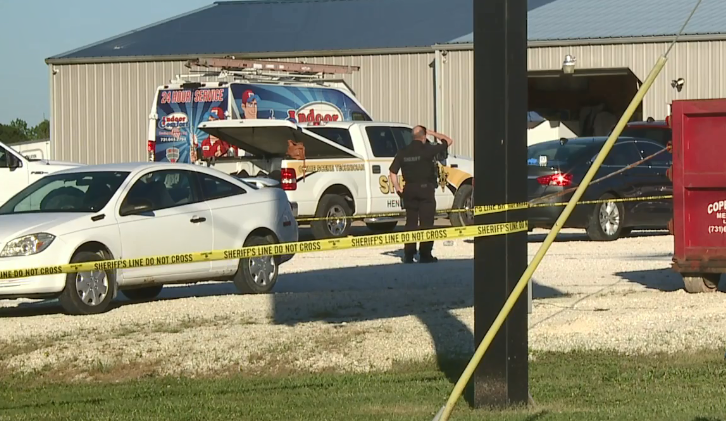 Sheriff Belew said Mercer then went in the building and shot and killed receptionist Cindy Townsend.

After a nearly eight hour standoff, Mercer killed himself.

WBBJ 7 Eyewitness News was there all day Monday as the standoff with Mercer continued into the evening.

Two weeks before the shootings, Mercer was arrested after allegedly assaulting Amanda Mercer.

“The suspect in yesterday’s incident in Henry County was arrested May the 12th by Paris PD,” Sheriff Belew said. “He was brought into the Henry County Jail for aggravated domestic assault.”

Sheriff Belew says he isn’t sure when Mercer was scheduled to appear again, but said he knew both Bob and Amanda Mercer and considered them friends.

“I knew both of them very well. I didn’t know of anything wrong with their marriage until here recently, and they became separated,” Sheriff Belew said.

When Belew arrived at the scene, he immediately began negotiations with Mercer in an attempt to convince him to surrender.

“He wouldn’t talk to me very much on the phone, just very little, but we were able to text quite a bit,” Sheriff Belew said.

Sheriff Belew said Mercer claimed he had a hostage. Authorities suspected it may have been Cindy Townsend, since she was not accounted for.

“He wouldn’t give proof of life for anyone else in the building besides himself. We never could get a picture of the hostage or getting the hostage to come to our door, anything along those lines,” Sheriff Belew said.

Both Amanda Mercer and Cindy Townsend leave behind family, including young children.

“Mrs. Townsend’s family, I met with last night at the Henry County Medical Center. It was her little boy’s birthday yesterday, as well as her mother’s,” Sheriff Belew said. “It was heart wrenching. I can’t imagine.”

“One of the best facilities by the hospital there is for domestic violence. It’s a coordinated and combined effort between a lot of different agencies,” he said.

Now, there are three dead. Sheriff Belew says all they can do is come together as a community.

“Thoughts and prayers to each and every one of them. Lift them up if you can,” he siad.

Sheriff Belew confirmed they were also in contact with the FBI during the negotiations.