CARROLL COUNTY, Tenn. — On June 5, the Carroll County Sheriff’s Office responded to a call on Latham Chapel Road in Lavinia. When they arrived, they found nine dogs shot to death. 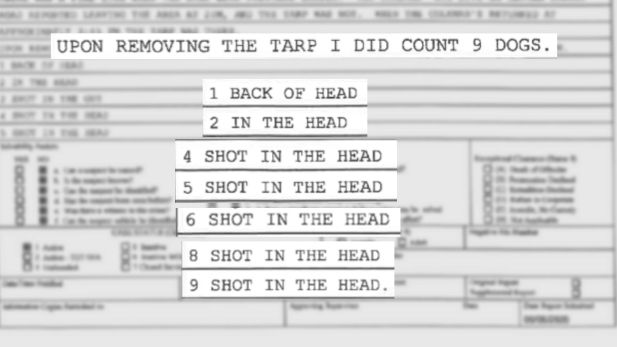 According to the sheriff’s office incident report, the dogs were hidden under a blue tarp. Seven of the nine dogs had been shot in the head.

Dogs being killed isn’t unheard of, but the Carroll County Humane Society says there is something unusual.

“Unfortunately, it isn’t uncommon to find it, but the nine is what is shocking to me,” said Caty Perritt, the president of the Carroll County Humane Society.

The report says that after interviewing residents in the area, investigators believe the dogs were likely dumped on the side of the road between 2 p.m. and 4 p.m. June 5.

Despite evidence of the incident, the sheriff’s office currently has no leads or witnesses. In other similar cases, charges have been difficult.

“On paper, the laws will look pretty good. I think when you run into the actual cases, it becomes problematic because it’s so easy for someone to say this animal was a threat to me, so I shot it,” Perritt said.

Perritt is encouraging residents to seek out local resources if they are dealing with strays or if they are having difficulty taking care of their pets.

“It boils down to this: Morally, we can do better. We’re required legally, to do better, but as an area, I think we need to do better,” Perritt said.

If you have any information about this incident or any other incident, you are asked to contact the Carroll County Sheriff’s Office at (731) 986-8947.