LEXINGTON, Tenn. — What if a hospital bed could be the difference between getting proper care, and an unfortunate accident? 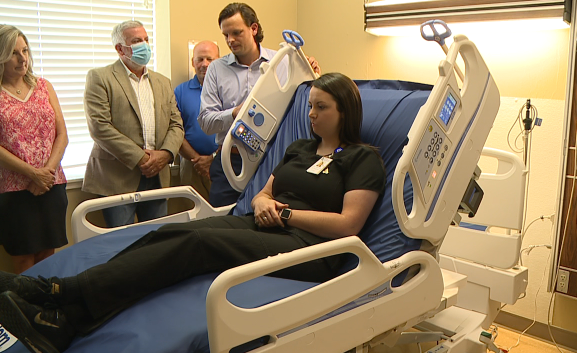 That’s why on Tuesday, they unveiled their new state of the art, high-tech hospital beds.

“What we’ve showed off today is the latest and greatest in hospital bed and medical device technology. It’s the most modern hospital bed on the market,” said Kyle Kopec, the Chief Compliance Officer for Braden Health said.

The beds can detect patient vitals, like heart rate and breathing issues, and make it easier for nurses to manage patients in their care.

Henderson County officials were given a tour by hospital management.

“The first shipment of 10 has arrived at the Lexington hospital. As they build more they will ship them out and they will eventually replace every bed in the facility,” Kopec said. “This technology is typically seen at higher level facilities, such as those seen in Nashville.”

The beds can even detect when a patient has gotten up, and it sounds an alarm.

The beds are part of a long term plan to upgrade the entire facility.

The plan is from Braden Health Incorporated, who took over the hospital in April, when it was was in a precarious situation.

“It’s our beds, our telemetry system, our nurse call system, things that have just been outdated and not able to replace, but we’re in the process of doing that now,” said Gary Stewart, the Chief Executive Officer of the Henderson County Community Hospital.

“Our goal is to provide treatment to 80% of the healthcare needs in the community. We want to be able to offer that here,” Stewart said.

If the plan stays on track, Henderson County can buck the trend of rural hospitals.

“We’re even including a replacement plan for the facility in the three to five year range. As long as everything goes the way it is now,” Stewart said.