Local county mayors react to the state of emergency extension

HENDERSON COUNTY, Tenn. — With the state of emergency being extended until August 29, local mayors have been looking into what changes they might have to consider going forward.

“We know that our numbers are still going up some, and so we are just asking people to continue using common sense,” said Henderson County Mayor Eddie Bray 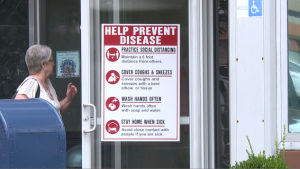 “We still have a lot of restaurants that are still doing curbside service,” Mayor Bray said. “As you go in, you could see the tables are set apart so you’re not within reach of someone else.”

Chester County Mayor Barry Hutcherson says before the most recent executive order, they were getting ready to potentially bring back more people from remote working.

“We was starting to build back and starting to get everyone called back, and starting all our businesses and jobs and I think that will put that to a halt,” Mayor Hutcherson said.

There hasn’t been a stop in the rising number of cases. Although some regulations will vary by county, Hutcherson says he is glad that the governor is at least looking into solutions.

“I believe the governor is doing the best he can and being advised in a good way, which I try to listen and go off with what they recommend us to do,” Mayor Hutcherson said. “I know it’s hard even in our rural county.”

Both mayors agreed that it’s best to be mindful of others health as new decisions are made day-by-day.

“Everybody is just doing their best with what they are given,” Mayor Hutcherson said.

“Everybody has to do their part to limit the spread you know,” Mayor Bray said. “We just ask everybody to do your part.”

Both mayors say they will look into whether the state of emergency impacts school re-openings, which as of now are still planned by the beginning of August.