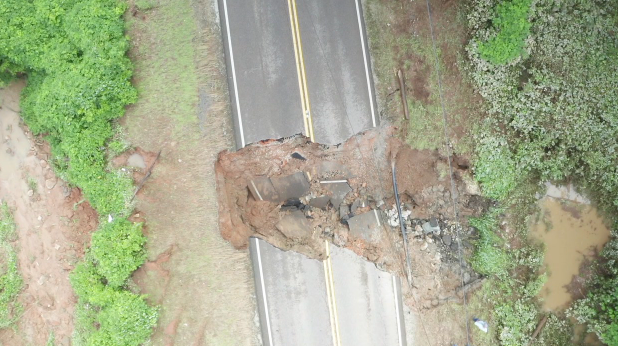 “A pipe fell there, and we lost pretty much all of the road. Not all of the shoulder, but most of the road,” said Bart Walls, the Chief Administrative Officer for the Madison County Highway Department.

Walls says the county reported damage on two other roads — Willoughby Road and Barnett Road — after at least three inches of rain fell.

“Most of the damage to those two roads was on the shoulder of the road, and we’re going to be able to repair that, and get those kind of back in shape,” Walls said.

Of the three roads, Christmasville has the most major damage, and will likely cost above $50,000 to repair. It will be closed for the foreseeable future.

Walls adds that when pipes get clogged up due to litter, the water starts gushing on top of roads.

“The trash that people have dumped in ditches or creeks, those flash floods wash all of that down to the cross drains that go under roads, and those things get hung up on the end of the pipe,” Walls said. “We believe that’s what occurred on Barnett Road, and Christmasville Road.”

If you see a cross drain near a road that is getting clogged up by debris, call the Highway Department, as this could pose a safety issue later.