Rain cooled down a few spots today, but most stayed dry and most will remain rain-free on the Fourth of July too. The chance for rain is low tomorrow but not 0% – we may see a stray shower or thunderstorm tomorrow in areas of West Tennessee close to the border with Mississippi. Rain chances will increase on Sunday and through early next week when confidence is increasing for a wetter pattern.

TONIGHT
A few isolated showers were still seen lingering around 10 o’clock tonight but they’re on their way off the map. Under mostly clear skies, temperatures will drop to the lower 70s by sunrise Saturday. 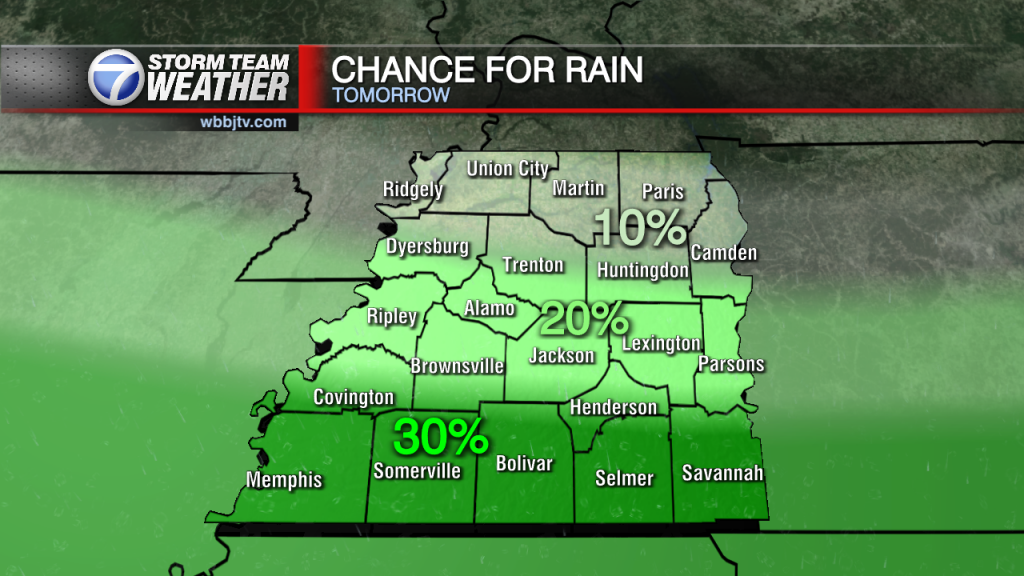 Tomorrow, we can expect mostly sunny to partly cloudy skies but there’s a very slight chance for rain with stray showers and thunderstorms from the afternoon through the early evening. Temperatures will be hot Saturday so you may end up hoping for a shower to cool things down! We’ll reach the lower 90s at the warmest point of the day with a heat index in the triple digits. Temperatures will then drop to the lower 70s on the night of the 4th under mostly clear to partly cloudy skies. Although rain chances are low tomorrow, we can’t rule out an isolated shower during fireworks shows near the Tennessee-Mississippi state line. Stay with WBBJ 7 Eyewitness News for the hour-by-hour forecast and keep up with Storm Team Weather online too for more updates.