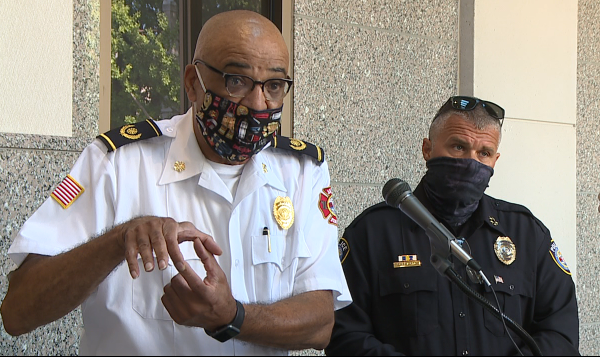 “Shame on those of you who have information, but are unwilling to share it,” said Darryl Samuels, Fire Chief for the Jackson Fire Department.

Firefighters and police officers responded to reports of a dumpster fire at 33 Carver Avenue on July 5.

When they arrived, officials say a crowd gathered and shot fireworks at the officers and firefighters.

“Enough to make a large welt on the back of one of our firefighters, but thank goodness he was wearing his personal protective equipment,” Samuels said.

“There is some cell phone footage that came up in the investigation. But there may be a possibility that we’re going to be able to identify some of the individuals that were involved in this incident,” Wiser said.

They are also not ruling out the idea of a planned attack.

“It is still an ongoing investigation, but it does appear that it was deliberate–that the dumpster was lit on fire and they waited for the fire department to arrive,” Wiser said.

No arrests have been made at this time.

Wiser says this isn’t the first time police have been attacked. But for the fire department, it’s new territory.

“In the past, we have not had a similar type of accident or incident,” Samuels said.

If you have information regarding the incident, call the Jackson Police Department at (731) 425-8400.