JACKSON, Tenn. — It’s out with the old, in with the new. The Jackson City Court is finally moving to their new location on South Royal Street. 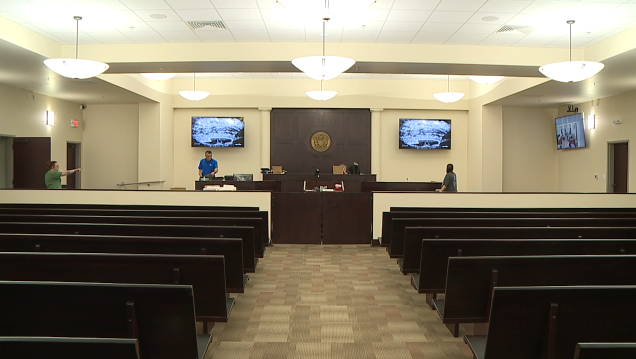 “We had a lot of rain delay dates, but it’s been paved, it’s been striped, the furniture is down there, and we are ready to go,” said Susan White, the Director of Purchasing for the City of Jackson.

Funding for the court was originally planned in August 2018.

After nearly a year of delays, the new city court is expected open Monday, July 13 with a completely updated courtroom and office space.

“Drug court is with them as well. So drug court is on one side, city court is on the other side,” White said. “Everything is going to be more efficient, safer, cleaner. It’s just a beautiful building inside and out.”

There are lockers in the front where people can put their belongings, so they don’t have to leave them in the car. There are also new protocols in place for inmates.

“Prisoners will be transported to the sally port, and then will go to their cells via the sally port, which is so much better than them being dropped off in the alley over by the old city court building,” White said.

Finally, there are better safety measures for the public.

“One of the features we’ve got over there is a drive-up lane, so they can pay their fines without ever having to come in,” White said.

The city did not have exact numbers, but they expect the project to come in around $100,000 under budget.