Congressman honors “Man of the Year” recipient for his service

JACKSON, Tenn. — One government official is recognizing a Jackson man for his dedication and service to the community. 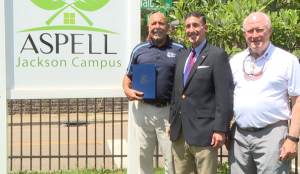 In June, Barber was awarded the title Jackson’s “Man of the Year” by the Jackson Exchange Club.

“I’m humbled that people think I might be a ‘Man of the Year’,” said Barber. “I know several former men of the year and to think that somebody thinks I’m worthy of that I’m really humbled by that.”

Congressman Kustoff recently had the opportunity to speak about Barber’s role and service in West Tennessee helping treat addiction in teens and adults.

“To be able to go to the floor of the House of Representatives and talk about somebody good and something positive, an entity like Aspell that is so good for the Jackson and Madison County and the West Tennessee community, I was honored to be able to do it,” said Kustoff.

For his service Congressman Kustoff presented Barber with a copy of that U.S. Congressional Record which mentioned Barber. 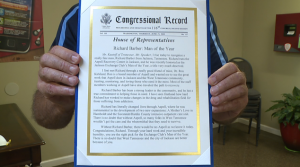 “All the credit and the hard work goes to our staff and our board,” said Barber. “We got a board that’s engaged and works hard.”

“To be able to spread the credit from Richard’s standpoint with his staff and the people that work at Aspell, that shows and demonstrates the type of person that Richard is,” said Congressman Kustoff.

Barber has been the Executive Director of the Aspell Recovery Center since 2005.