Health officials: ‘These gatherings are going to kill us.’

JACKSON, Tenn. — As we’ve seen over the past five months, things are constantly changing when it comes to COVID-19. 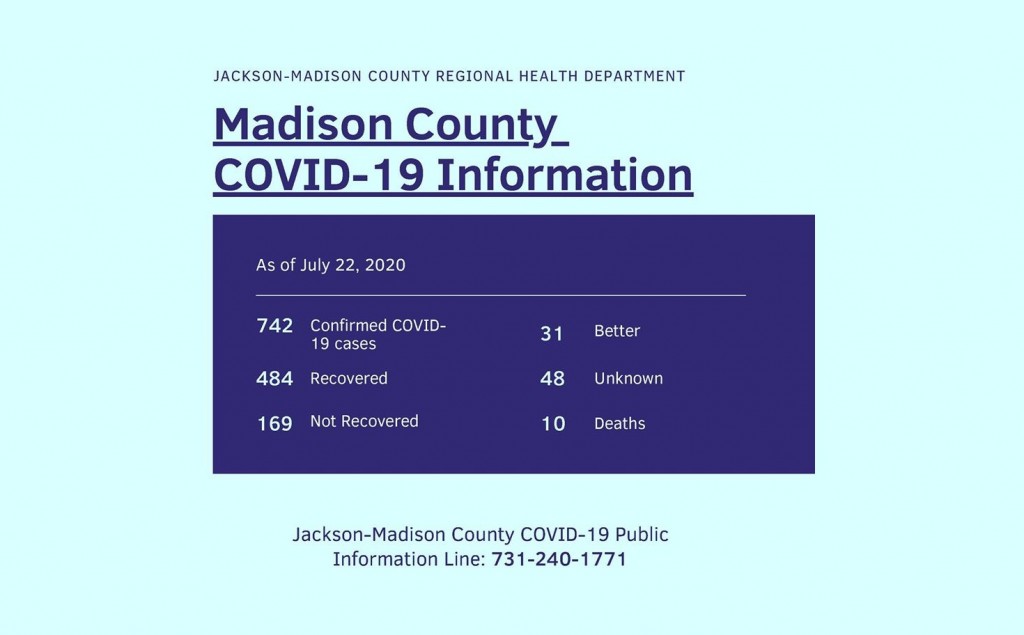 As of Wednesday morning, we now have a total of 10 deaths in Madison County due to the virus.

“Two additional Madison County residents have passed away. A 62-year-old male and a 69-year-old male both died this week from complications with COVID-19,” Mallory Cooke, public information officer for the Jackson-Madison County Regional Health Department, said.

The Centers for Disease Control and Prevention is now saying anyone who tests positive for COVID-19 must quarantine for 10 days, and be fever-free for 24 hours before they can leave quarantine, instead of the previous requirement that patients must be fever-free for 72 hours.

And a hot topic still: wearing a mask.

“Masks work. I don’t care what anyone out there is saying. They don’t make you get sick. They do slow down the spread of the virus,” Jackson-Madison County Regional Health Department Regional Hospital Coordinator Wayne Arnold said.

Health officials say the number of positive cases we’re seeing are coming from large gatherings like weddings and parties.

“These gatherings are going to kill us.  Bottom line. That’s it,” Arnold said.

“This isn’t the time to throw a 50th anniversary party, or a huge party. We just encourage people to postpone them. Think about having your event at another time,” Cooke said.

Jackson Mayor Scott Conger says not only does he listen to local health officials, he depends on them.

“In my job, I don’t have time to write a research paper. I have to depend on those in the medical field to tell us what works and what doesn’t work,” Mayor Conger said. “We can find anything on the internet that fits our opinion. But I think, at the end of the day, the ones that are on the frontline, providing healthcare, who are looking at those people in the face who are on ventilators. When they’re in the hospital, that are being tested, those are the ones we have to listen to.”

And when asked if there could be a mandate to have restaurants close at a certain time each night to keep crowds low?

“That’s not beyond possibility, but it’s not being talked about or in discussion right now,” Madison County Mayor Jimmy Harris said.

The hospital is also constantly looking at their plans and evolving with the pandemic, including revising their surge plans.

“We maximize the resources as a healthcare system, and that’s been our focus from the very beginning. But that does change. As the numbers change we’ve tweaked a little bit,” Tina Prescott, Chief Operating Officer with West Tennessee Healthcare, said.

Amy Garner, chief compliance and communications officer for West Tennessee Healthcare, said the North Hospital is a part of West Tennessee Healthcare’s emergency plan. Garner says COVID-positive patients require isolation, negative pressure rooms, and specialized care, which can be provided in higher volumes at the main campus, Jackson-Madison County General Hospital. Garner says North Hospital does not have the same ICU capacity and capabilities to serve patients who require that level of care with the current volume of patients.

There are now 742 total cases of COVID-19 in Madison County, a 40 case increase from Tuesday. Two hundred of those cases are active, with 21 to 30-year-olds marking the highest percentage of positive COVID patients at 20 percent of the total case count.

There is also a free mask giveaway scheduled for Thursday, July 23 from 9 a.m. to 11 a.m. at the West Madison Senior Center at 806 Huntersville-Denmark Road.

During Tuesday’s mask giveaway, the health department says 1,000 masks were given out at the UT Ag Research Center.