JACKSON, Tenn. — After receiving hundreds of shares on social media, many are questioning the legality of rescinding a Union University student’s acceptance to the university’s nurse anesthesia graduate program based on sexual orientation. 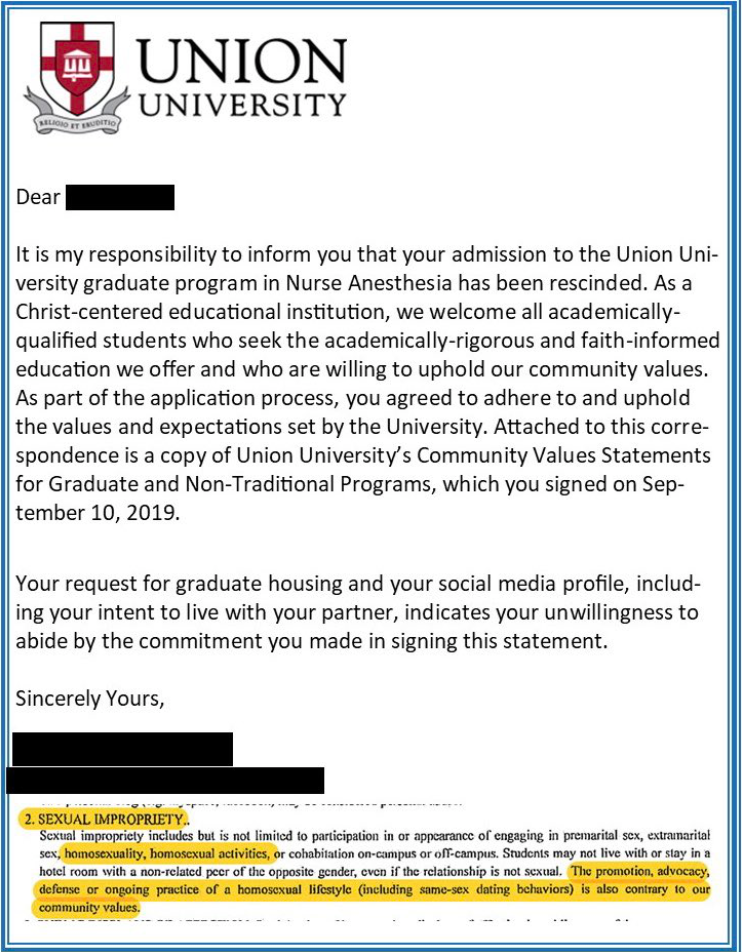 According to the U.S. Department of Education, Title IX protects from discrimination in areas like recruitment, admissions, athletics, and financial assistance among others.

“Title IX generally applies where, even if it’s a private school, if it receives any type of federal funding. However, there’s an exception for religious based schools,” Donahoe said.

“If a religious based school’s teaching or its beliefs are contrary to the admission of gay students, then it has an exemption from Title IX and can discriminate,” Donahoe said.

“As of yet, Congress has not enacted any legislation that would prevent private, religious based schools from discriminating against a student,” Donahoe said.

Union University released a statement about rescinding the student’s acceptance:

“As a Christian institution, Union University has standards of behavior for its faculty, staff and students that are consistent with Biblical teaching and historic, orthodox-Christian practice. We love our students and want them to thrive and succeed, and we believe that a standard of conduct that honors God and submits to his authority is an important part of that success. All students who apply to Union University sign a statement saying they’ll comply with the university’s values. Those students who fail to abide by those values — or who show no intention of attempting to do so — are subject to disciplinary measures that can include dismissal from the university.”

Title IX also applies to employees, such as professors and administrators.