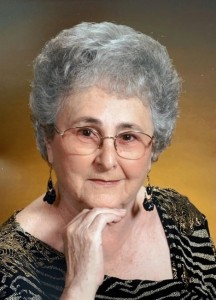 She was born in Sardis, TN on March 4, 1927 to Houston W. and Dora Creasy. On September 15, 1945 she married W. H. McBride who preceded her in death in 1985. Mrs. McBride retired from First National Bank (First American Bank) after forty years of service. She enjoyed music, country dancing, and her friends. She will be greatly missed by her family but will be reunited with her heavenly family. We are sure she is dancing in Heaven now.

In addition to her parents and husband, she was preceded in death by her brother, Manuel Creasy; and sisters, Juanita Ross and Avis Scott.

The family will receive friends and loved ones on Sunday, July 26, 2020 from 1-3 p.m. in the South Chapel of George A. Smith and Sons. The funeral service will follow at 3 p.m. with Ray Pack of South Jackson Church of Christ officiating. Burial will follow in Sardis Cemetery in Sardis.