HARDIN COUNTY, Tenn. — While some schools are postponing their first day, Hardin County is starting Monday. 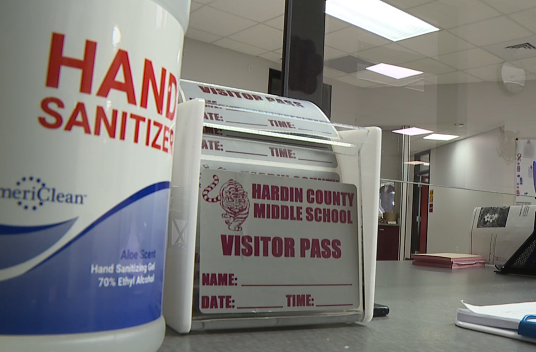 Get to know your neighbor: that’s the theme for school this year.

“Our teachers are actually changing classrooms instead of our students. Students will be assigned to a first period class, as they are every year, but they’ll stay in that same room all day,” said Hardin County Middle School Principal Dr. Duane Eliff.

Eliff says students will also go to PE together and eat together, and don’t even think about mixing it up.

“If a student tests positive, and we’re notified, we have seating charts on file of wherever they’ve been any time during the day, and we’ll notify parents of any students who were in a box of six feet around them,” Eliff said.

But the goal is to keep that from happening. They’re taking everyone’s temperature before school starts, and are asking, but not requiring everyone to wear a mask.

“We have hand sanitizer stations provided throughout the building,” Eliff said. “They’re in high traffic areas, in each classroom, throughout the hallways, the gym, the library, the cafeteria especially.”

Also expect everything to be more spread out.

There will be about 600 students on campus this year. That’s about 80% of their normal population.

Furniture has also been moved out of classrooms to make more room for social distancing.

“In the cafeteria, we have reduced the seating capacity by 50% and expanded to five lunch blocks instead of three,” Eliff said.

Something pretty interesting the school has come up with? Tiger paws, all spaced six feet apart, have been placed on the floors. That way when the kids walk into the school, they know how far to stand apart from each other.

“It may sound silly, but it’s just one more thing to make it a little more fun for them,” Eliff said.

Because we have to remember, these are sixth through eighth graders who haven’t been in school since mid-March.

“We are excited to bring our kids back to school,” Eliff said. “We have not seen them since March 16, and our sixth graders we’ve never seen because they’re brand new to our building. So we’re thrilled to welcome them back in person.”

Hardin County Schools will be open Monday. There is a staggered schedule for each grade the first week.