Cooler Than Average Temperatures for Most of the Week

Scattered showers and thunderstorms were moving through West Tennessee this afternoon and evening bringing localized downpours and frequent lightning to parts of the area. This may have been our wettest day for the rest of the week with high pressure forecast to move into the region tomorrow. However, there’s cooler air coming too! Expect it to go from feeling like August 3rd to October 4th overnight! 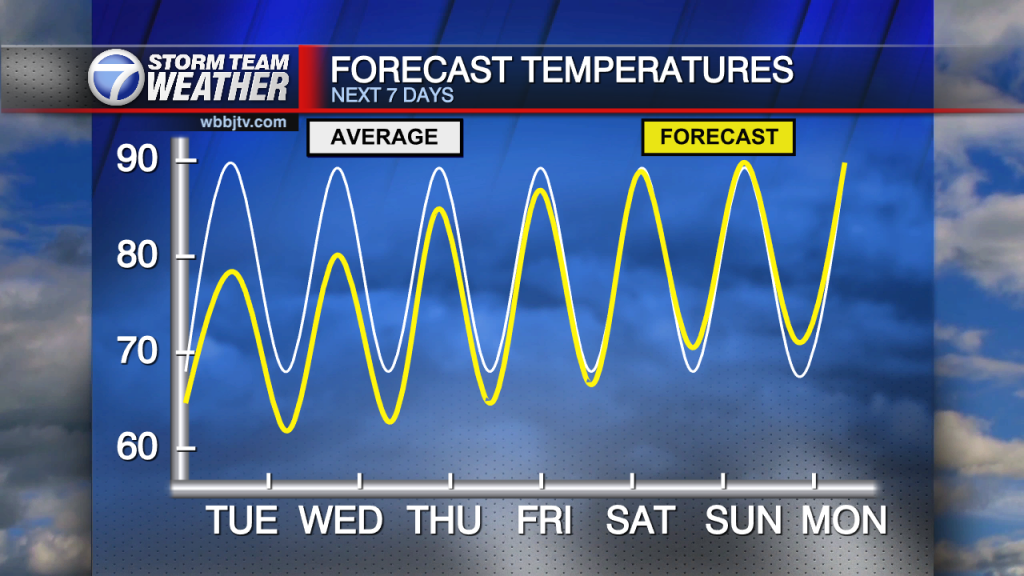 TONIGHT
A few showers will linger through the evening in West Tennessee but most of the area will be dry after midnight. Partly to mostly cloudy skies will develop after midnight with overnight lows in the lower to middle 60s.

Expect a cool and mostly cloudy day tomorrow. Temperatures will be well below average thanks to the clouds and northwest winds, so expect highs in just the upper 70s with a slight chance for rain. We’ll be mostly dry for the rest of the week after tomorrow with temperatures gradually getting warmer. Stay with WBBJ 7 Eyewitness News for the latest forecast, and for more updates keep up with Storm Team Weather online too.

At 11:10 PM CDT, the center of Hurricane Isaias made landfall in North Carolina near Ocean Isle Beach as a category 1 hurricane with maximum sustained winds of 85 mph. Isaias is moving toward the north-northeast near 22 mph, and this general motion accompanied by a gradual increase in forward speed is expected through tonight followed by a further increase in the forward speed on Tuesday. On the forecast track, the center of the hurricane will move near or along the coast of the mid-Atlantic states on Tuesday, and continue across the northeastern United States Tuesday night.

Only gradual weakening is anticipated now that Isaias has made landfall in the Carolinas and is forecast to move across the U.S. mid-Atlantic region tonight and Tuesday.

The deepest water will occur along the immediate coast in areas of onshore winds, where the surge will be accompanied by large waves. Surge-related flooding depends on the relative timing of the surge and the tidal cycle, and can vary greatly over short distances. For information specific to your area, please see products issued by your local National Weather Service forecast office.

WIND: Hurricane conditions are expected within the hurricane warning area in South and North Carolina this evening and tonight, with tropical storm conditions spreading onshore in the next few hours.

Widespread tropical-storm-conditions are expected in the tropical storm warning area from coastal North Carolina to the mid-Atlantic states, including portions of the Chesapeake Bay region, tonight and Tuesday, with wind gusts to hurricane force possible. These winds could cause tree damage and power outages.

RAINFALL: The following rainfall accumulations are expected along and near the track of Isaías:

Carolinas and the Mid-Atlantic: 3 to 6 inches, isolated maximum totals 8 inches.

Western and northern Maine: 1 to 3 inches.

Heavy rainfall along the East Coast, near the path of Isaías, will result in flash and urban flooding, some of which may be significant in the eastern Carolinas, Mid-Atlantic and Northeast through Wednesday. Widespread minor to moderate river flooding is possible across portions of the Carolinas and the Mid-Atlantic. Quick-responding rivers in Northeast will also be susceptible to minor river flooding.

SURF: Swells generated by Isaías are affecting portions of the Bahamas and the southeast coast of the United States and will spread northward along the U.S. east coast during the next couple of days. These swells are likely to cause life-threatening surf and rip current conditions. Please consult products from your local weather office.