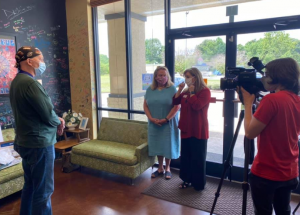 “I’m extremely surprised! I did not see this coming,” said Childress.

He will be the West Tennessee nominee for the Jacqueline Kennedy Onassis Award which represents the greatest possible service to a local community.

“There is a lot of struggle in the world and I always say behind many smiling faces are wounded souls
and sometimes we may be the only hope a person gets in a days time,” said Childress.

Childress makes a positive impact in the Jackson community by hand-writing encouraging messages inside take out boxes at the bake shop, his son Matt’s business.

“So, if something is just as simple as writing a note in a box, it’s just the fact you can make a difference in a person’s day or life and that really means a lot,” said Childress.

He also co founded the “Livin’ A Dream” Foundation which helps raise money for people diagnosed with cancer.

What many may not know is Childress was diagnosed with prostate cancer 14 years ago.

“Doesn’t matter if he’s lying in a hospital bed or lying at home, this guy has multiplied good more than anybody I know! He is encouraging and motivating other people and giving them hope. I was diagnosed with breast cancer and one of the first people to call is Dale, ” said Dale’s aunt, Cheri Childress.

“When he got cancer 14 years ago, he wanted to be able to help and inspire people with cancer. He has given so many people hope and inspiration,” said Dale’s sister, Geni Holmes.

Dale does not let cancer define him. He still comes into the bake shop everyday at 6 a.m. to write messages; knowing in his heart people need these messages just as much as he does.

“I know a lot of people and I can not think of a better person that I believe would better would represent West Tennessee than Dale Childress,” said Cheri.

“Heck yeah, I’m excited! Now, I gotta figure out how to live up to it!” laughs Childress.

Due to Covid-19, the annual banquet was cancelled and the national awards ceremony will take place virtually this year from Washington D.C. This will take place in September presented as a one hour live-stream online.