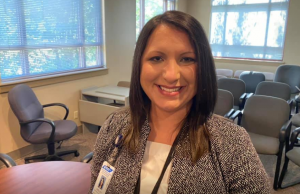 “It really lights fire under me,” says Hayes.

She found out hundreds of students in the Jackson Madison County School System only have flip flops and do not have their own tennis shoes or even socks.

“Can you believe there are kids without shoes?” asks Nick Hayes, Shelley’s husband.

Immediately, Hayes decided she needed to do something about this.

“My mom brain goes back to worst case scenario. There is a child in 40 or 30 degree weather and I could not imagine a child in that type of environment,” says Shelley Hayes.

Hayes met with a committee to start a 5K run to raise money.  It wasn’t as successful as she hoped, so she went to plan b.

“I saw that gleam in her eye and I thought, ‘oh no its gonna happen,'” said Shelley’s co-worker, David Alred.

She says Jackson Mayor Scott Conger suggested Samaritans Feet International, a humanitarian organization that serves struggling people of the world by washing their feet and giving them a new pair of shoes.

“I saw her eyes light up and she was eager to do it, said Shelley’s Old Hickory Rotary Club member, Aaron Fitzgerald.

As Club Secretary of Old hickory Rotary Club, she worked with other rotary clubs to create the Rotary Heart and Sole project.

“You get to sit with the student sitting across from you and ask the about their day and wash their feet which is the most humbling experience,” said Shelley Hayes.

Hayes gave away more than 1,400 pairs of shoes and socks to students at Arlington, Andrew Jackson and Alexander Elementary Schools at three local events.

“The time was the most precious time for me. They will never forget them washing your feet. To me, that is the most humbling,” said Shelley Hayes.

She plans to continue to not only help children’s spiritual souls, but the soles on their feet too.

“There’s always a need for shoes and a for a word of hope,” said Shelley Hayes.

Kids celebrate the spooky season with the Jackson Symphony