MADISON COUNTY, Tenn. — Video from the Jackson Fire Department was posted around 6 a.m. on Thursday morning.

It was of a fire that started around 2 a.m. Once the fire was going, it was hard to tell it was even a big-rig trailer.

“We received a call around two o’clock this morning, a report of a tractor trailer on fire, about the 77 mile marker eastbound,” said Madison County Fire Chief Eric Turner.

At one point, traffic was backed up miles, prompting Jackson police to issue a statement warning other drivers in Jackson about increased traffic in their areas from people avoiding the interstate.

There were also so many people on scene because this fire was considered hazardous.

“We came to realize pretty quickly that it was hauling hazardous material,” Chief Turner said.

The tractor trailer was hauling a type of plastic that, when introduced to fire, can become very dangerous.

“This fire started while the truck was in transit. The fire started in the rear wheels of the trailer. That’s where the fire originated,” Chief Turner said.

Hours later they were still putting out hotspots in the trailer by using foam instead of water. 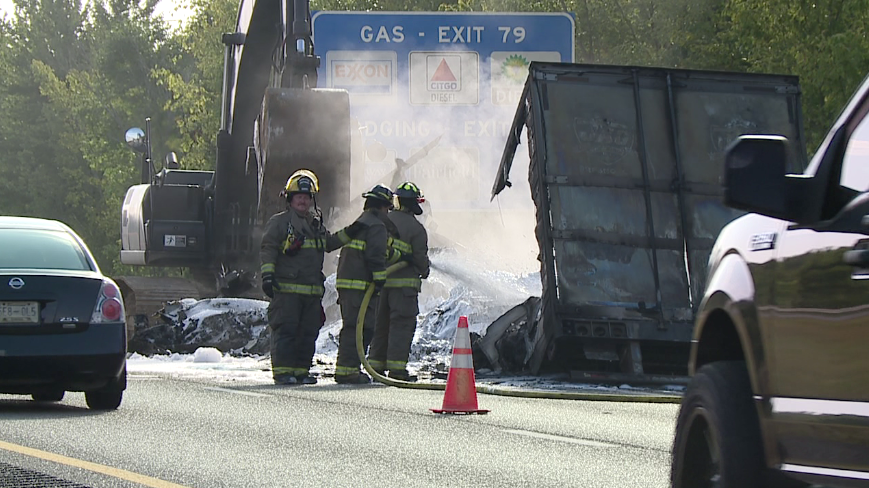 “The biggest concern with this type of incident is the runoff from our water,” Chief Turner said. “We try to use the minimum amount of water with the least amount of runoff, which causes problems down the line.”

“The driver did a good job getting his truck unhooked from it and getting away from it and calling 911, giving us updates on what was going on here on the scene,” Chief Turner said.

Chief Turner told WBBJ 7 Eyewitness this could have been a very bad situation. Fortunately, there is some good news.

“We’re very fortunate. No one got injured. We’re also very fortunate it happened at the time of day it was. Traffic wasn’t quite as bad. That’s why we tried to get this interstate opened before rush hour,” Chief Turner said.

There were no injuries, according to Chief Turner.