PARSONS, Tenn. — A local couple wants to encourage their town through writing and prayer. 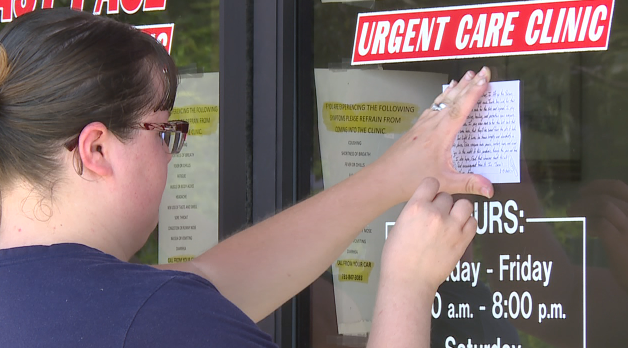 Jerry and Katie Evans said it was in their hearts to show encouragement, especially with the pandemic.

“It’s a big situation, and we want them to know that God loves them,” Jerry Evans said.

“The more time we spent in prayer, the more I felt like, especially with watching the news, people could probably use encouragement,” his wife, Katie Evans, said.

If you’ve been out and about in Parsons, or own a business, you may notice some words of encouragement left behind.

These notes are from Jerry and Katie Evans, who want to encourage the community and spread God’s love.

They got the idea when going home from a church event.

“God just kind of laid it on my heart, instead of going there, just go around and pray, write notes for different churches,” Jerry Evans said.

At first it was just praying for churches, but they added a few other places and included the notes.

“Somebody could get encouragement from that, where they wouldn’t know they were being prayed for if we just prayed for them and didn’t leave anything,” Katie Evans said. “I think it’s an honor that God is letting us do this, and I’ve never done anything like this before, so it’s at the same time, kind of exciting.”

They started a couple of weeks ago, and so far they say they’ve written about 50 to 60 notes.

Saturday, they added some new places to their list, like Fast Paced Urgent Care, the Animal Clinic and China Buffet, to name a few.

“I hope, through this, people will get encouragement like we’re hoping,” Katie Evans said.

The dynamic duo plans to keep writing as long as they feel called to.