MARTIN, Tenn. — After 28 years in various law enforcement agencies around West Tennessee, Monte Belew is taking on a different challenge as the Director of Public Safety at University of Tennessee-Martin. 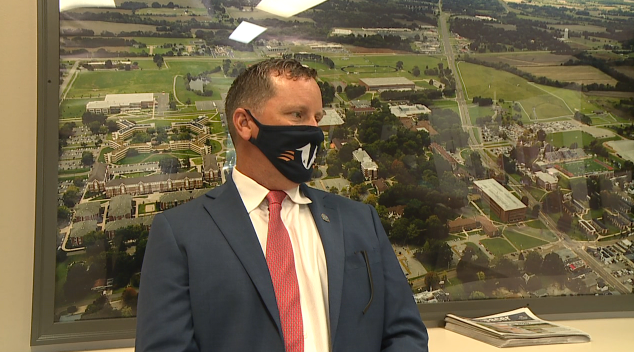 “I can’t believe this is actually my first day at UTM,” Belew said. “I’m very excited and very honored to be a part of the UT system.”

Belew, an alumnus of UT Martin, was most recently the Henry County sheriff — a role he held for 14 years.

On Monday, he announced his resignation to the county commissioners, and stated his intention to take the UTM job. Belew says it was months in the making.

“UT did a very thorough process of interviews and in depth discussions,” Belew said. “You know, you invest so much of your life and time in law enforcement, your heart and soul, so it was a very traumatic move.”

As for why Belew changed — he says he had eyed the job for a while before it came open.

“When the opportunity came along, and it doesn’t come along often to be a part of UTM, I couldn’t let this opportunity pass,” Belew said.

In recent months, Henry County has had multiple high profile crimes, including a double murder-suicide and a child abuse case involving a toddler locked in a cage.

Belew admits that it was a lot to take in.

“I dealt with those type of cases for 28 years of my life,” Belew said. “To say that it doesn’t take a toll on you, would not be the truth.”

“My next move from here will be the front porch in a rocking chair,” Belew added.

The election for the new Henry County sheriff will be held in November.