JACKSON, Tenn. — Lots of adjustments are being made for students starting school again. Prior to the start of the year, the Jackson-Madison County School System already had a plan in place for virtual or in-person learning options.

“Last week on Wednesday, Thursday, Friday, we distributed devices to those who have picked virtual or cyber,” South Side High School principal Anita Tucker said. 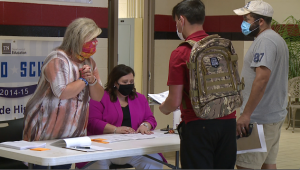 Students were able to come to South Side High School on Monday to pick up their work packets as they transition back to remote learning next week. Only a few students were roaming the halls, as in-person learning started off with staggered schedules.

“Today, we have seniors, tomorrow juniors,” Tucker said. “Sophomore on Wednesdays, and freshmen on Thursday.”

This is one of many ways they are ensuring health protocols are followed during the pandemic, along with new facial recognition devices that read temperatures.

“They worked amazing and, I mean, everybody just comes in, they know they have to have their mask on. If their mask is not on, they deny them access,” Tucker said.

At Pope Elementary School, one concerned mother and PTO member wanted to take extra steps to ensure a health environment for children, with the help of a local church.

“Obviously there’s a lot of barriers to that, to be safe for both the students and the teachers. I asked if they had any supplies to help make partitions,” parent Leann Henderson said.

“We came in Saturday, and working again this Saturday, to put together these plexiglass barriers for students for them to have a safer healthier environment to learn in,” Alan Teel, the missions pastor at West Jackson Baptist Church, said. 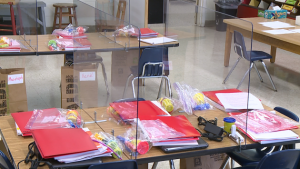 As a parent in a household with both parents working, Henderson says she hopes that these adjustments are only brief this semester.

All Jackson-Madison County Schools will be returning to distance and virtual learning next week.