JACKSON, Tenn. — Thousands across Southwest Louisiana are without power, but a local group of linemen made the nearly nine hour trip to help victims of Hurricane Laura. 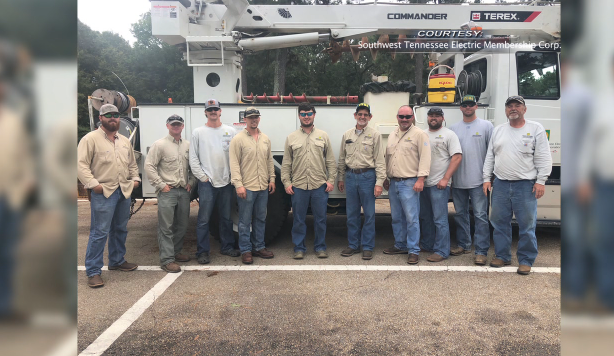 “We have a prayer before we send off our guys, and ask the Lord to put a hedge of protection around them and guard them,” said Tina Morris, Communications/Community Outreach Specialist for the Southwest Tennessee Electric Membership Corporation.

Workers from each branch of the electric company made the nearly 590 mile trip to Lake Charles, Louisiana. The linemen will work with the Jeff Davis Electric Cooperative.

“The system down there has approximately 11,000 electric meters, and they are 100 percent out of power,” Morris said. “They have estimated they have over a thousand broken poles on their system, and a lot of it is still under water.”

Downed power lines tangled with other debris litter many streets in the area.

“It’s very dangerous because they have to be sure that all of the lines are dead before they go into an area and start working,” Morris said.

She says the teams will be gone for a little more than a week.

“It will probably be 10 days or more that they’re there, but they will be there until they get everyone restored,” Morris said.

She says it’s not the first time the linemen have gone out to help out after a major hurricane.

“Their families are also making great sacrifices for them to go down there and help other people,” she said.

“I pray they’ll be a blessing to the people that they’re there to help,” Morris said.

She says half of Jeff Davis Electric’s employees aren’t able to travel because of flooding or blocked roads from downed trees and power lines.