Hurricane Sally is located just 100 miles east-southeast from the mouth of the Mississippi River. This hurricane is forecast to make landfall on the Gulf Coast Tuesday night or Wednesday morning. We may see some rain from Sally in West Tennessee, but nothing like what we experienced with Laura. 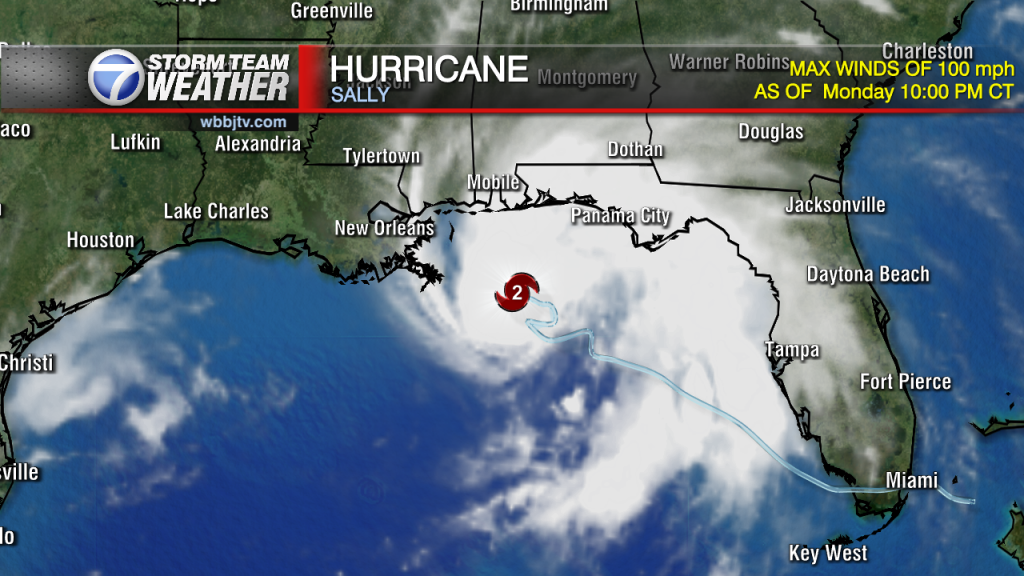 TONIGHT
Skies will remain mostly clear in West Tennessee tonight but it will continue to be warm and muggy. Overnight, temperatures will only drop to the middle 60s with light east-northeast winds. We’ll be dry tonight. 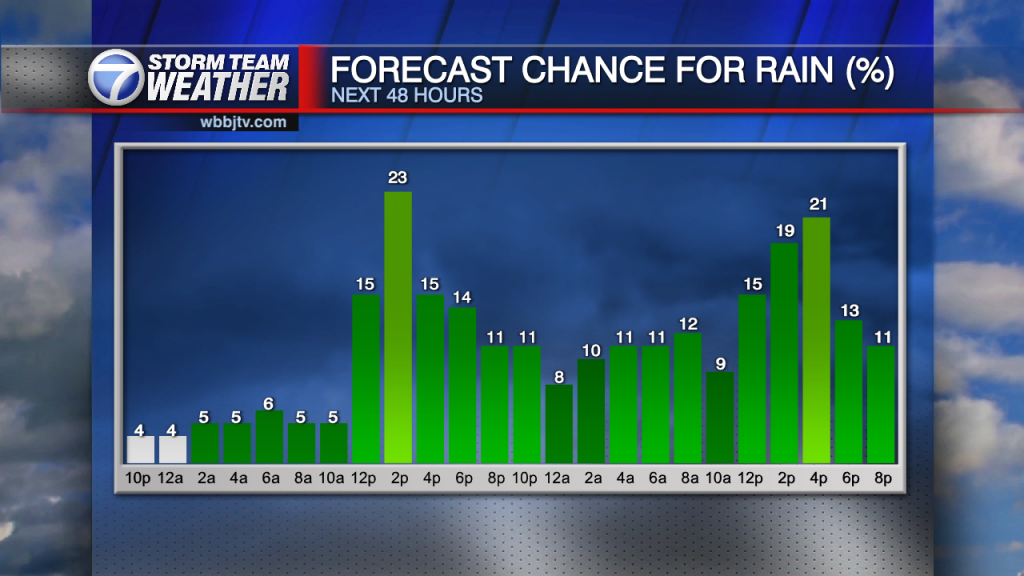 Outer bands from Hurricane Sally could reach West Tennessee later tomorrow with highs in the middle 80s. Pockets of heavy rainfall with occasional thunder and lightning are possible from thunderstorms moving west across the southeast United States. Our best chance for rain is Tuesday afternoon and evening but it’s still only 30%. There’s a 20% chance for rain here overnight Tuesday night with overnight lows in the upper 60s. Additional showers will be possible on Wednesday and Thursday when a cold front comes through. Stay tuned to WBBJ 7 Eyewitness News for the latest hour-by-hour forecast, and for more updates keep up with Storm Team Weather online too.

From the National Hurricane Center…

At 10:00 PM CDT, the center of Hurricane Sally was located near latitude 28.9 North, longitude 87.6 West. Sally is moving toward the west-northwest near 3 mph and this motion is expected to continue through Tuesday morning. A northward turn is likely by Tuesday afternoon, and a slow north-northeastward to northeastward motion is expected Tuesday night through Wednesday night. On the forecast track, the center of Sally will move near the coast of southeastern Louisiana tonight and Tuesday, and make landfall in the hurricane warning area Tuesday night or Wednesday.

Maximum sustained winds are near 100 mph with higher gusts. Some strengthening is forecast early Tuesday and Sally is expected to be a dangerous hurricane when it moves onshore along the north-central Gulf coast.

The estimated minimum central pressure based on data from the NOAA and Air Force Hurricane Hunters is 986 mb.

Overtopping of local levees outside of the Hurricane and Storm Damage Risk Reduction System is possible where local inundation values may be higher than those shown above.

The deepest water will occur along the immediate coast in areas of onshore winds, where the surge will be accompanied by large and damaging waves. Surge-related flooding depends on the relative timing of the surge and the tidal cycle, and can vary greatly over short distances. For information specific to your area, please see products issued by your local National Weather Service forecast office.

RAINFALL: Sally is expected to be a slow moving system as it approaches land, producing 8 to 16 inches of rainfall with isolated amounts of 24 inches over portions of the central Gulf Coast from the western Florida Panhandle to far southeast Louisiana through the middle of the week. Life-threatening flash flooding is likely. In addition, this rainfall will likely lead to widespread minor to isolated major flooding on area rivers.

Sally is forecast move farther inland early Wednesday and track into the Southeast with rainfall of 6 to 12 inches possible across portions of inland southeast Mississippi and Alabama. Significant flash and urban flooding is likely, as well as widespread minor to moderate flooding on some rivers.

Further heavy rain is then anticipated across portions of eastern Tennessee, northern Georgia and western Carolinas Thursday into Friday. Flash, urban, and minor river flooding is possible across this region.

Outer bands of Sally are expected to produce additional rainfall of 1 to 3 inches across the Florida peninsula today. This rainfall may produce flash and urban flooding and prolong high flows and ongoing minor flooding on rivers across central Florida.

TORNADOES: A tornado or two may occur this afternoon through Tuesday over coastal areas of the Florida Panhandle, Mississippi, Alabama, and extreme southeastern Louisiana.

SURF: Swells from Sally will continue to affect areas from the west coast of the Florida peninsula westward through the coast of southeastern Louisiana during the next couple of days. These swells are likely to cause life-threatening surf and rip current conditions.

Beta Will Bring Rain to West Tennessee This Week