Good Morning West Tennessee. We have a wet start this morning along scattered showers. They are coming in waves generally light to moderate. I think there will be a break in the steady rain around the late morning and early afternoon. However, as the main surface low (Beta) accelerates and moves NE it will bring more concentrated, and perhaps heavier rain for some across southwest Tennessee. The exact position of the heaviest rain has been in contention among the models. In general, it appears the heaviest rain will be south of I-40 with totals between 1-2.5″ of rain for some. The rest of West Tennessee will generally end up between Nothing and .5 or less. 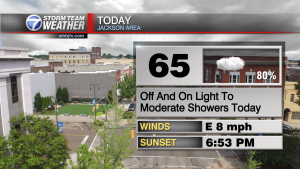 Clouds Linger Through The Weekend

Blustery Winds And Showers For Saturday

Colder and Cloudy on Saturday with Patchy Drizzle