JACKSON, Tenn. — U.S. Senator Marsha Blackburn held a video conference to give an update from Washington D.C., just a week and a half before the election. 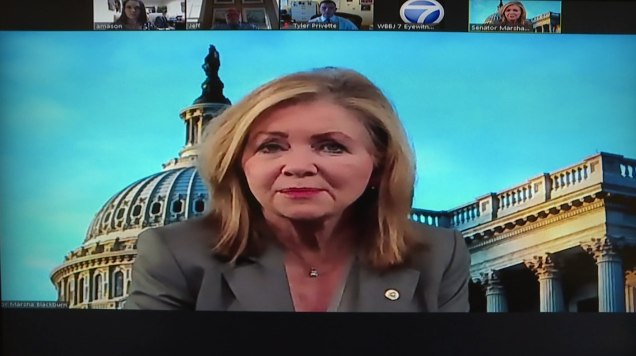 “We have been very pleased to push forward with Judge Barrett. We want to make certain that she, and all conservative women, have a seat at the table,” Blackburn said.

Friday, Blackburn discussed the upcoming final confirmation of Judge Amy Coney Barrett, which is set for Monday. The plan is to move forward with the floor vote process to set the stage for Barrett’s final confirmation.

She says Tennesseans do not want activist judges on the bench.

She says viewers saw two different visions for this country. For example, one discussion centered around energy sources.

“You saw President Trump talk about how we are energy independent, and how important that is for having a lower cost of energy,” Blackburn said. “You saw Vice President Biden talk about why he wants to end oil and gas, and just go to renewables as a source of energy.”

She also commented on early voting turnout in Tennessee, which local election officials say has been a record turnout so far.

“I think it is absolutely fantastic. We love the fact that people are showing up, and they are voting. This is a very good thing,” Blackburn said.