JACKSON, Tenn. — Coming down the 45 Bypass, you can see a field of over 953 flags near the Cumberland Presbyterian Church. 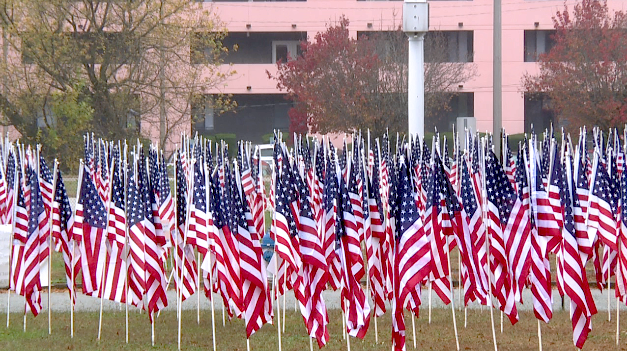 Every year around Memorial Day, the Jackson Exchange Club holds their “Flags of Freedom” ceremony, which was instead held on the eve of Veteran’s Day after being delayed due to COVID.

Gabe Mudd, president of the Jackson Exchange Club and a WBBJ 7 Eyewitness News employee, says businesses and individuals purchased the flags, which are dedicated to either a veteran or a first responder.

It’s also dedicated to children who lost their lives due to child abuse or neglect.

The exchange club uses the money raised from the flags to donate to the Carl Perkins Center for the Prevention of Child Abuse.

“Everyone was quarantined and at home and out of school, and so we saw quite a rise in cases of abuse and neglect,” Mudd said. “It is more important this year to give and to support the work of the Carl Perkins Center because of that.”

The ceremony consisted of music and recognition of the hard work put in by healthcare workers combating COVID-19.

“A first responder or a healthcare worker, or anybody that’s on the front lines fighting COVID, does not want to hear that we’re heroes,” said Jackson Fire Department Deputy Chief Don Friddle. “Because we’re not heroes. We’re just doing what the good Lord is calling us to do.”

Besides raising funds for a cause, the overall theme called for unity in the community.

“What we’re here for is to support each other,” Friddle said. “It’s not about one individual. It’s about a group of people and how that group of people responds to help others when the need arises.”

The exchange club also said they reached their goal of $20,000 to donate towards the Carl Perkins Center for the Prevention of Child Abuse.