NASHVILLE, Tenn. — In response to what some officials call “an ongoing issue of privacy,” a state representative writes an op-ed on the topic. 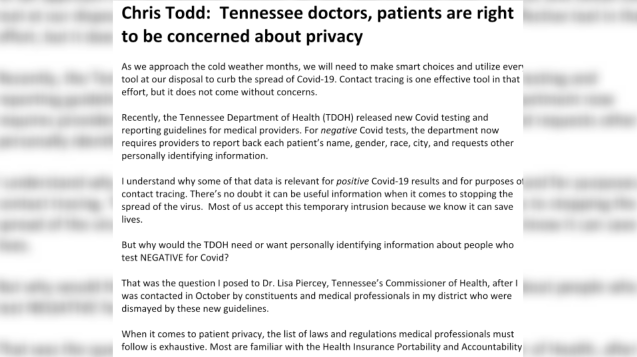 “My main purpose in the op-ed was to inform the citizens of the state what their department of health is requiring providers to turn in on their behalf,” District 73 Representative Chris Todd said.

Tuesday, Representative Chris Todd released this op-ed on the hot topic of clinics reporting private information of people who test negative for COVID-19 to the state health department.

In late October, WBBJ 7 Eyewitness News first brought this story after Dr. Jimmy Hoppers spoke out about reporting information such as the patient’s name, address, city, and other things.

From there, Representative Todd reached out to the health department to learn more.

According to the health department, this information is required federally, not by the state.

“As we reached out to the department, they first said they do not collect personal information for negative COVID-19 tests, and maintained that position for a number of days, even to the point of telling me that they had corrected the form that some of the providers used to only make that information optional,” Representative Todd said.

“Once they got that form out, then I had a copy sent to me, a screen shot showing that the name is actually still required. So, I confirmed with the department that it was not a mistake. They do still want your name, and also it’s the same on their online portal,” Representative Todd said.

The explanation he got as to why they needed this information, at first, was for statistical purposes.

Now, Representative Todd says the recent explanation was just that they “needed” it.

He is considering legislation in January to correct the issue.

“I think, considering the personal liberty and freedoms that I’m bound to protect of my constituents, I was very disappointed that the change of course took place,” Representative Todd said.

Representative Todd encourages people to get tested for COVID-19 if they feel the need, but to also talk with their doctors about disclosing information.