JACKSON, Tenn. — Benjamin Pratt was 14-years-old when he and his friend were crossing the Bypass in Humboldt and were struck by a car.

His friend was killed and Benjamin Pratt was paralyzed. 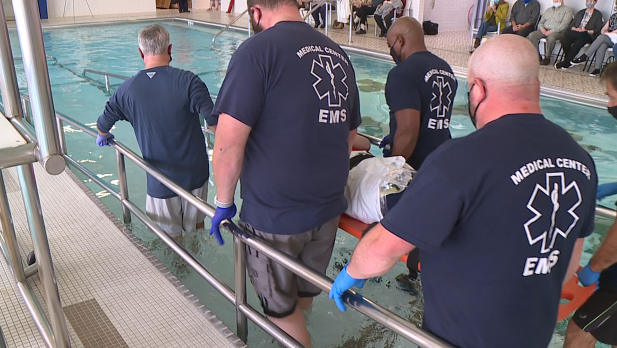 Benjamin Pratt is now 29-years-old and being cared for by his mom, Sherry Pratt.

On Thursday, family and friends watched on as one of Benjamin Pratt’s dreams came true.

“There is no words. We waited for a while and Ben was thrilled. I don’t think he slept in a week,” Sherry Pratt said.

Benjamin Pratt had expressed his desire to be baptized to his mom, and she knew they would need help to make it happen.

“We’re all just ecstatic. We are so grateful for everybody that has put in all this hard work for us,” Sherry Pratt said.

With the help of EMS, his baptism was made possible with equipment on standby for Benjamin Pratt’s health.

“EMS services took care of him then. His family and the nurses have done a great care for him over the last 15 years, and we are just excited to be here on this day,” said Paul Spencer, Operations Manager for Medical Center EMS.

Benjamin and Sherry Pratt’s pastor, Randy Kea at Humboldt Church of Christ was there to perform the baptism.

“This was a combined effort of several different folks and authorities and people, and so we are all just real thankful. I know the family is too,” Kea said.

Everyone involved says they are honored to be a part of this special moment and his family for making his wish come true.

Out of respect for Benjamin Pratt’s privacy, we did not show his face in our video.

Park to mark 159th anniversary of the Battle of Corinth